Val Kilmer sacrifices his life for the reunion, while Tim Robbins and Josh Groban also help 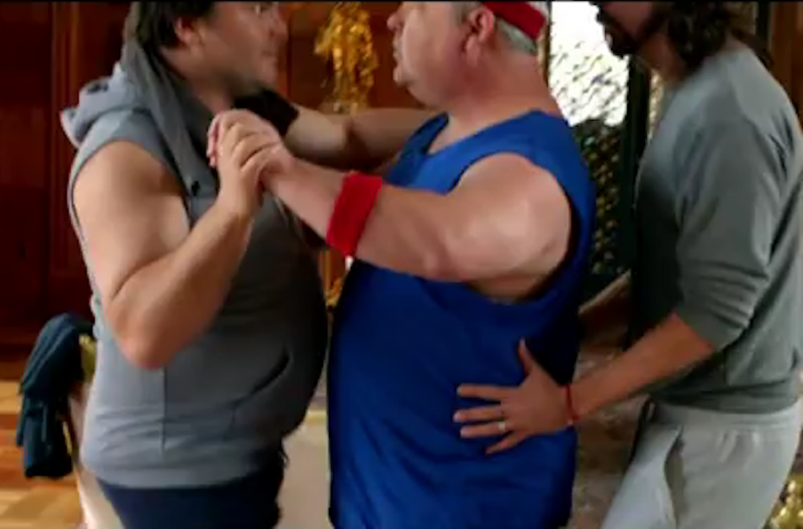 Things we knew Tenacious D could do: sing about their junk, do majestic crap like ride an eagle in their videos, parody Jack Black’s stardom, jest about Kyle Gass’ emotional reliance on Black. Things we did not know Tenacious D could do: get President Obama to legalize marijuana by diving into a weeks-long hug, get Tim Robbins to cameo in a video, shoot Batman in the heart, make another album. Rize of the Fenix, which drops May 15 on Columbia has dropped its first video, for a track predictably titled “To Be the Best,” and it’s chock full of D-esque cameos, predictable or not.

First, Tim Robbins helps tell the tale of Tenacious D’s (fake) disintegration after the (real-life) flop of their movie, The Pick of Destiny. While Jack Black managed to forge his own, (real-life-ish) very successful acting career, Gass descends into institutionalized madness, where he stews with only his amorous thoughts of Black to keep him company. Gass finally breaks out of the mental facility, finds Black at his mansion chatting merrily about Scorsese with Val Kilmer, attempts to assassinate Black when he claims he doesn’t know him, and kills Kilmer instead. (Did you know Tenacious D was capable of murdering Batman?) Of course Kilmer’s death has been a sacrifice in the name of a D reunion, and thus, the comeback montage begins.

Of course, no Tenacious D video could be complete without the blessings of Foo Fighters frontman and occasional D drummer Dave Grohl, whose guidance is obviously crucial. While golden-voiced Josh Groban helps the team tackle music theory and vocal training (with the help of copies of Impregnating Ears for Idiots, Blowing Fucking Minds for Idiots, Creaming Jeans for Idiots, and Rocking Balls Off for Idiots, natch), a beanie’d Grohl teaches them how to play their instruments again, as well as… how to ballroom dance. Watch the video below to sate the latent pre-pubescent boy lying, buried deep, within your soul.