There’s this thing that’s always made the Shins the Shins, and despite the hue and cry over James Mercer’s firing of his bandmates, it wasn’t the players who surrounded him. It’s an easy thing to miss for casual fans, those patrons who briefly swooned to “New Slang” or bopped to “Kissing the Lipless,” joining a seemingly never-ending beach party where skinny kids with concave chests drank Two-Buck Chuck, chain-smoked American Spirits, and devised new ways to mock George W. Bush. Really, it’s in those old lyrics, often lazily characterized as “cryptic,” but upon closer reading revealed the plain truth: Mercer was miserable.

Flash back now to all that cleverness and cadence, penned with the inked-up dagger of a great social wit, but turned painfully inward, voiced by a man quietly resigned to a tuneful but terrible fate. “One hand on this wily comet,” Mercer sings toward the end of 2007’s Wincing the Night Away, the last Shins album. “Take a drink just to give me some weight… I’m barely a vapor.” So, when the wispy Portlander started enthusiastically collaborating with buzz-y producers (Danger Mouse for 2010’s Broken Bells project), gutted his beloved band for a genuine reboot, and told interviewers that he’s been inhibited for far too long, well, superfans were right to sweat. To flip Natalie Portman’s enduring Garden State declaration, are the Shins still capable of changing your life now that their chief architect has so drastically changed his own?

Port of Morrow is the first Shins album whose title doesn’t imply discomfort. Mercer is 41, married with children, and presumably happy. What then will replace that underlying frenetic nerviness that gave every good Shins song its teeth? A few things, it turns out. Namely familiarity, maturity, pop sensibility, and strangeness — not necessarily in that order, but rarely overlapping. First single “Simple Song” triumphantly plants a flag for Classic Shins, Mercer’s voice soaring over a bounding mix of strum and shred. There are bits of flair — squirrelly guitar notes, crisp piano hits — and a chorus that mimics Chutes Too Narrow‘s “Gone for Good,” except instead of being a refutation of love, Mercer now offers a dedication to his wife: “This is just a simple song / To say what you done / I told you ’bout all those fears / And away they did run.” 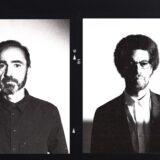 Equally satisfying is “September,” a prime example of first-rate Solo Shins — Mercer alone, a man and his guitar. But trouble emerges with “It’s Only Life,” a schmaltzy song about acceptance and the first sign of Shins for Adults. Here, Mercer channels James Taylor, abandoning poetry for lyrical bombs like “Open up your parachute / Something’s gotta stop the free-fall,” followed, no less, by a cymbal crash. “For a Fool” is a far better stab at maturity, mimicking Wilco’s brand of all-grown-up, a Sky Blue Sky-like easy rambler.

Shins on Pop is also a 50/50 proposition. “Bait and Switch” is the brightest sound that Mercer’s ever made, a tropical shuffler with a bossa backbeat and surf-rock solo, but “No Way Down” is overwhelmed by treacle as he awkwardly crams syllables into a track that feels like a studio preset: jaunty alt-’90s bubbler #3.

Which leaves the Brave New Shins. Though Mercer has hired a hit squad of proven merit — from producer Greg Kurstin (Lily Allen, Foster the People, Ke$ha), Wild Flag drummer Janet Weiss, former Shins Dave Hernandez and Marty Crandall, others — Port of Morrow is not a full-band effort. And the best songs bear the mark of an auteur weirding out, by himself. Opener “The Rifle’s Spiral” is upbeat and off-kilter, driven by the ramshackle intensity of a Clinic song, but somehow still chiming. “Fall of ’82” pays tribute to White Album¬-era Beatles, and while the unusual R&B of “40 Mark Strasse” may not be a perfect fit, it’s refreshingly unusual. And then there’s the iridescent, spaced-out calliope of “Port of Morrow,” a song so fantastically alien it sounds beamed in from another album entirely.

It’s on that closing track that Mercer tips his hand, stops singing about how strong he’s become, and aims his poison pen at the world outside his door. “I saw a photograph, Cologne in ’27 / And then a postcard after the bombs in ’45 / Must’ve been a world of evil clowns who let it happen / But now I recognize, dear listeners / That you were there, and so was I.” He wails like Thom Yorke, conveying pain and futility and all that tough shit that makes great poetry sing. Port of Morrow‘s musical muddling is to be expected — the band hails from a time when people still thought they knew what “indie rock” meant. What’s surprising is that when Morrow is almost over, Mercer unveils the Shins We’ve Been Waiting For.