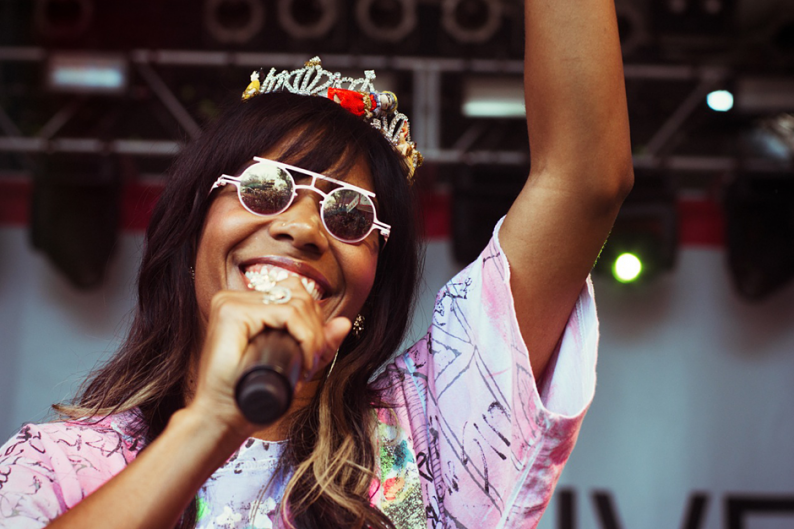 After Escort finished their set on the main stage at Stubb’s, the afternoon’s host, comic DC Pierson, commended the 17-piece disco army on having the fewest number of laptops allowed onstageby Austin ordinance: one. A throwaway line, but also an underlying theme of sorts at SPIN’s Friday party, brought to you by Sonos, Neuro, Miller Genuine Draft, Red Diamond Wines, and SESAC: Dance music is alive and well and being played by human beings. And it makes for a great day in the sun — on a work day, no less — and we say this with noeditorial bias whatsoever. Why would you suspect otherwise?

South Africa’s Spoek Mathambo and his four-piece band got the day off to a fast start with songs from his Sub Pop debut Father Creeper, blending elements of African club-culture and hip-hop, compelling the hungover and sleep-deprived to move a little more than they’d planned to at 12:45 in the afternoon. (Bonus: Keytar!)

Escort saw Mathambo’s penchant for flesh-and-blood dance music and raised it considerably, managing to evoke Studio 54 fever dreams in the middle of a dusty barbecue joint to hundreds of kids born well after 1977. Seeing that many people strutting and playing horns and strings and singing about cocaine running around your brain is kind of infectious.

Meanwhile, Main Attrakionz, G-Side, Big K.R.I.T., and PopChips contest winners Dionvox turned the inside stage at Stubb’s into a frantic party of its own. The crowd was a little guarded at first for Main Attrakionz, but woke up when rapper MondreMAN lept into the crowd and started hugging everyone he could reach, showing off two pairs of boxers while partner Squadda B sported a complicated-looking Captain America hat. That hands-on, up-close-and-personal mood isn’t just a large part of these DIY acts’ appeal, it also carried through the rest of the afternoon in there. G-Side brought along two backup singers and got some DJ help from the Brits of Southern Hospitality: Their set-closing a cappella version of “Recognize” turned into a group shout-along. Big K.R.I.T. was all smiles, serenading one lucky lady and getting plenty of help from the room on “Country Shit.”

Last time the Big Pink were in the U.S., after their 2009 debut, Robbie Furze and Milo Corday largely played to backing tracks and samples. Adding live drums and bass to the mix makes the songs from this year’s Future This sound that much fuller, without losing any of the experimentation that makes the record stand out.

Bigger is also better for Best Coast — now a four-piece, the new songs from the upcoming The Only Place (including the title track and “Last Year”) add just the right amount of muscle to Bethany Cosentino’s reverb-soaked dream-pop. Extra points for chugging from a whiskey bottle with cohort Bobb Bruno (playing more guitar now with a new bassist in tow).

But no act right now proves that more than Santigold, who brought late-night avant-garde theatricality to a late-afternoon backyard kegger. Costumed dancers, plus Santi herself in a horse suit, there’s enough going on to distract you from the music if not for the fact that every song, including new ones from the soon-to-be released Master of My Make-Believe, sounds like a stone-cold hit.