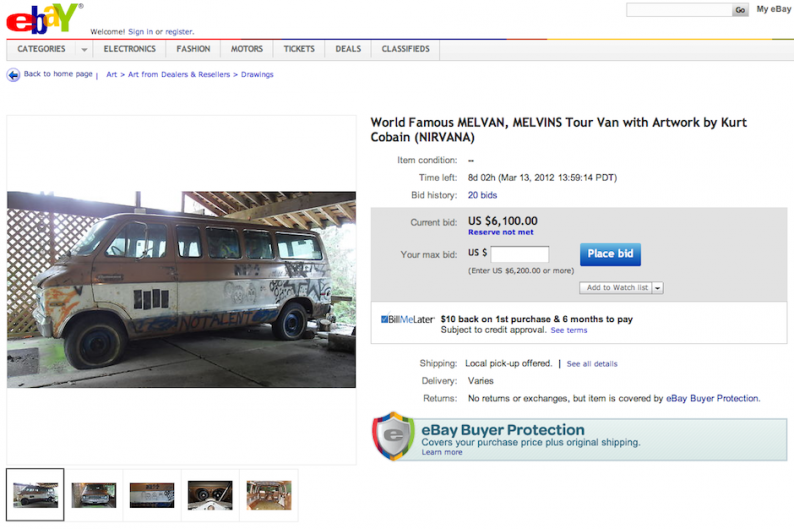 A piece of ’90s rock history has once again found its way to the communal auction block. Montesano, Washington’s Ben Berg is selling the Melvins’ first tour van, affectionately known as the “Melvan,” which was gifted to him by bassist Matt Lukin’s mom after the seminal punk band relocated from Montesano to California, according to a profile in the Examiner. The Melvins fan, who drove his teenaged band No Talent around in the bus during the ’90s, listed the notoriously POS bus as “Pop Art” on eBay because the graffiti on its sides includes cartoon portraits of KISS drawn by a kind of famous guy named Kurt Cobain. Its sale comes on the heels of the Melvins’ announcement last week of a new EP and album, out March 13 and June 5 on Scion A/V’s label and Ipecac Records respectively.

The van’s current bid is up to $10,300, but so far Berg’s base asking price hasn’t been met for this genuinely “unique piece of music history.” If a Melvins (or Cobain) superfan wanted to shell out the dough for it, they’d be getting two priceless Pacific Northwest music scene experiences in one: owning the now-defunct van, which Cobain “was oftentimes known to drive to early local gigs,” and traveling to the Melvins’ hometown, because the listing states this purchase is local pick-up only. The seller says he’ll even throw in Lukin’s original ownership papers. “I don’t want to take it to the junkyard, scrap it,” Berg tells the Examiner, noting the vehicle was “in really bad shape when I got it.” He says, “It’s up for sale to the right person.”

UPDATE: An earlier version of this story erroneously reported that Tad frontman Tad Doyle was selling this van based on other online reports noting the seller’s eBay handle (who has overwhelmingly positive feedback) is “taddoyal.” SPIN has since been contacted by Mitch Holmquist, who tells us he is selling the van on behalf of Ben Berg, and made it clear at no point did he impersonate Tad Doyle. SPIN regrets the error.