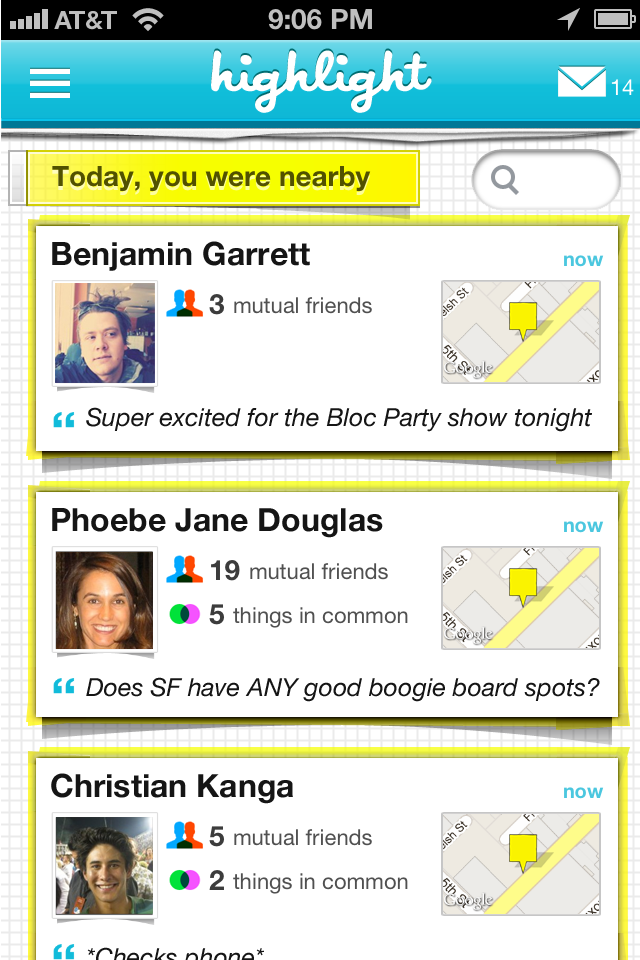 Following in the footsteps of the then little-known Twitter, which first caught fire at the 2007 edition of SXSW Interactive, Highlight is suddenly on everyone’s minds and everyone’s phones (although a good number of people end up disabling or uninstalling the app as well; it’s not all rave reviews).

The basic pitch is this: Install this free iPhone app and it will alert you when either your friends, or new people you may want to be friends with based on common interests, are nearby. It’s a mix of two hot trends — social discovery and geo-location — which just means it uses social media and your phone’s GPS to connect people. Highlight connects to your Facebook account, pulling friend and interest data, and when you get pinged with a friend or potential future friend — or, you know, friend [winks] — nearby, you can see their location on a map, engage them in an instant messaging session or just ignore them.

But Highlight faces a couple of big hurdles before moving from fad to fortune. One, some users are curious enough to try it out, but soon grow wary of broadcasting their location and Facebook data to anyone nearby with the same app installed. There’s a Big Brother element that’s definitely worrisome (although you can turn off the tracking at any time).

The second big problem is that the always-on tracking and searching is a big drain on the iPhone’s battery, and we’ve heard from several people who have shut down the app because it was killing their phone’s talk time. Future updates may improve this, but having any location service always running in the background is going to be a big hit to battery life.

Highlight definitely wins the hottest SXSW app award, but we’ll have to see if it has real legs. Some trendy start-ups become the next Twitter or Foursquare, others are hot for a minute then fade into obscurity.

The Highlight app is available for free from Apple’s iOS app store.