Even if you’re not an art comics fiend, Benjamin Marra’s work should still look familiar. His illustrations have appeared in The New York Times Book Review, Nylon, and other publications, and he’s done cover art for Lil B (6 Kiss and Black Ken), and Madlib (Medicine Show #5: The History of the Loop Digga). Under his Traditional Comics imprint, he’s put out two issues of Gangsta Rap Posse, a raunchy, ultra-violent funnybook that imagines an N.W.A-like rap crew living out all the antisocial stuff they stuffed into their rhymes. Imagine R. Crumb if he got hip and listened to Straight Outta Compton instead of boring, forgotten, blues and jazz 78s, and you’re like, halfway there.

Marra’s other self-published comics include, Night Business, a delightfully trashy ’80s noir, The Incredibly Fantastic Adventures Of Maureen Dowd (A Work Of Satire And Fiction), which turns the political columnist into a Jason Bourne-like secret agent, and Space Barbarian of the Ultimate Future Dimensions: Zorion the Swordlord, a zonked-out webcomic that you can find out about for yourself by going over to the Traditional Comics website.

I met up with Benjamin Marra a few weeks ago in downtown Brooklyn, on the day of his art show, “Storm Fires Of Doom,” sponsored by Bergen Street Comics and held at 170 Tillary Street. We talked about good-bad art, receiving all caps e-mails from the Based God, that weird moment when gangsta rap was all the rage, and creeping out the Italian border patrol.

Have you seen this list of “The 100 Worst Hip-Hop Album Covers of All Time?” I was pretty bummed out to see the Lil B 6 Kiss cover on there.

Does it upset you when your work’s evaluated like that?

I could give a shit if they don’t like my stuff. But it does bug me that like, there are people putting their boring aesthetic choices and decisions out there onto bookshelves and stuff, with no question. I hate wading through the same bullshit. And there are obviously people that get my stuff and understand where I’m coming from, but there’s also people that don’t understand it, and think it’s crap. On a certain level they’re right, but they also don’t get it, you know? I like my stuff to look kinda crappy, which follows the content.

The thing I try to point out about your work is how consistent it is. Like, you’re mining a very specific style.

The stuff that I like is the shitty stuff, you know? I like comics. I mean, I liked Picasso and going to museums and all those painters that you like in high school, but they didn’t grab me the same way that Todd MacFarlane grabbed me. I don’t know, sometimes, I wonder if I got it wrong in a way? I really want to be a professor and I actually have the possibility of a teaching gig in the future, but I’m kind of worried because maybe I’ll look at the kids who are doing really good stuff, and be like, “That’s wack.” And then, to the kids doing bad stuff, I’ll be like, “This looks great!”

You have a fine arts background, right?

I went to school for illustration. But it’s debatable whether or not illustration is a fine art. I went to Syracuse University and then I went to the School Of Visual Arts for grad school, in illustration again. So, I have two degrees in a field that you don’t need degrees in. Then, for about seven years after school, I worked for newspapers doing informational graphics. I think that sort of helped me become really, really productive. It had ramifications for how I do comics and how I do illustration in a big way.

You know, having to meet a deadline on a daily basis, working quickly, working efficiently, and knowing when to not be precise. College really messed me up because you get taught certain things that are trying to get you to forget all the bad habits you had as a teenager scribbling in a notebook. So, it took me about almost ten years to forget all the bad habits I developed from getting a formal arts education, and go back to how I used to draw when I was 15 or 16. 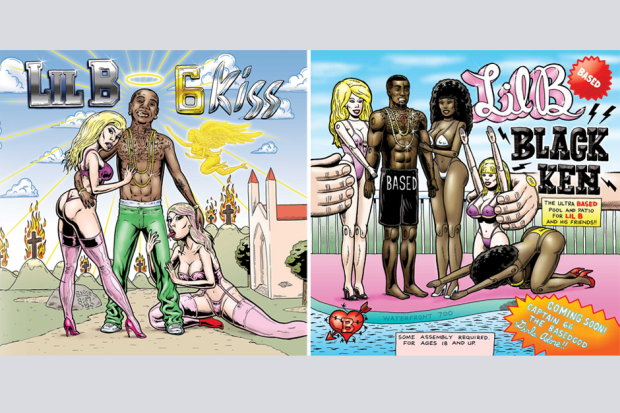 How did you get involved with Lil B?

An email from Lil B’s manager, out of the blue. I don’t know how they found me. I don’t know if it was because they saw Night Business or Gangsta Rap Posse but yeah, Lil B’s manager just sent me an email. I didn’t know who Lil B was at the time. I just took the commission on a whim because I had never been approached by a rapper and it sounded like fun.

Did you have to pitch him a lot of ideas?

Those image concepts are all Lil B. 6 Kiss was first and then, Black Ken. That’s all him. He sent these really amazing emails of art direction. They are incredible, obviously. They’re in like, all caps. When you get emails in all caps, it’s like, a different sort of thing. You know? With email and with text messaging, people get lazy with capitalization. A lot of times you just get lower case stuff. But when it’s like, all caps, that’s reserved for like, my crazy aunt, you know? Like someone who doesn’t really know what’s going on.

The emails are almost like, little rap songs. They’re hysterical and amazing. Just like his songs are, you know? They were written exactly how he speaks and there was like a lot of like, intuitive spelling that added some flavor to it. They were great! 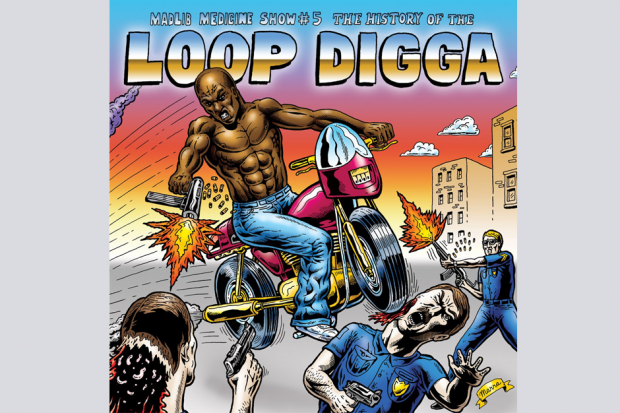 Yeah, the Lil B covers led to the Madlib thing, I think. That and Gangsta Rap Posse. Working with Jeff Jank, Stones Throw’s graphic designer, was awesome. Jeff was basically like, “It’s a collection of Madlib’s kinda like, early ’90s, sorta gangsta rap stuff, so just do something in that vein.” They were pretty pleased with whatever I wanted to give them.

Let’s talk about Gangsta Rap Posse. Obviously, it’s really funny and totally nuts, but it seems to me, in a weird way, like a period piece.

Gangsta rap is just a moment in time that’s probably never gonna come again. It’s an era of our youth that a lot of kids today don’t understand. Like that shit was really crazy. They were having congressional hearings about this stuff. It’s like what satanism in heavy metal was in the 1980s. That same kind of fear. It’s so weird to me that music instills such fear in the authority class, you know?

Yeah, it’s hard to defend something to Congress just because it’s awesome. You play with the idea that some people at the time seemed to genuinely believe this music was truthful, even, autobiographical. That it wasn’t entertainment.

Yeah, I mean, N.W.A saw their friends killed, but a lot of the rapping was about the idea of killing, I think. To a degree it was autobiographical, but a lot of it was about, how fucking cool it was. But part of the idea came from a time when I got really interested in the Rwandan genocide. This was right after September 11th and I was like, “I don’t know what the fuck is going on in the world.” I just started reading a lot and I started reading The New York Times every day and I would read these world news briefs. And they had this one brief about this Rwandan pop singer who was being brought up on genocide charges because like, his songs were inspiring killing. And I was like, “Holy shit! It is actually happening. Music is actually controlling people to kill people!” 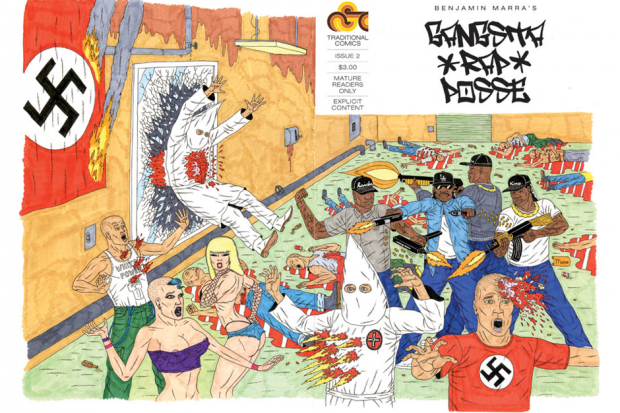 When it comes to violence and language , you don’t hold back in Gangsta Rap Posse. Then, in the second issue, you go even further with sex. I think it actually makes the comic feel more clever and sincere. Like, you’re really matching the lyrical content on the page.

I mean to me, dealing with something like gangsta rap, I knew that I could not hold back. Even in the first issue, I held back a little bit. But I knew that I needed to go to places that gangsta rap went to, or it just wasn’t going to work. Originally, I wanted it to have like, X-rated stuff in the first issue, but I didn’t have the balls or the guts to go there yet. Because I was already treading on subject matter that’s a little difficult.

What made you just think, “screw it,” and go there like that though?

This goes back to college. This is actually something good that came from my arts training: When I was in Italy for college, I kept a sketchbook of everything I was afraid to draw. Like, the most fucked up shit I could think of. It was an exercise. I was looking at a lot of Francesco Clemente stuff and it’s like dudes with matches trying to light women’s farts and stuff. It’s like, weird shit! And I was like, “Well, this guy is doing it, I got these ideas, so fuck it.” I was doing these really fucked up drawings and I didn’t show them to anybody. Well, eventually I had to show it to people, because I got searched at the border of Slovenia and Italy.

Why did you get searched?

I was kicked off the train at the border of Croatia and Slovenia at two o’clock in the morning. They thought I was a drug dealer. So, when I eventually got back into Italy they searched me and they searched my bag and they were looking through the sketchbook and I was like, “Oh my god!” I wasn’t mad about what they were going to see. I was mad because like, this is my stuff that I don’t show to anybody, you know? They were violating me. It was devastating. After that though, I showed the sketchbook to a friend and he just started laughing.

So, that traumatic experience and your friend laughing, set you free?

Totally. Like, growing up in high school, I had these thoughts about these things, but I couldn’t draw them because people would think I was crazy! You’re materializing something that’s abstract in your mind. Even just saying things, you’re making it reality, you know? So, to draw something is to make that fearful idea real, in a way. Because other people can then see it and process it and absorb it. But after being searched and my friend laughing at the drawing, I wasn’t afraid to draw anything. I think that’s what a lot of other artists should go through. Otherwise, you’re not creating work that’s honest to yourself or the subject matter.