The Megadeth frontman ponies up 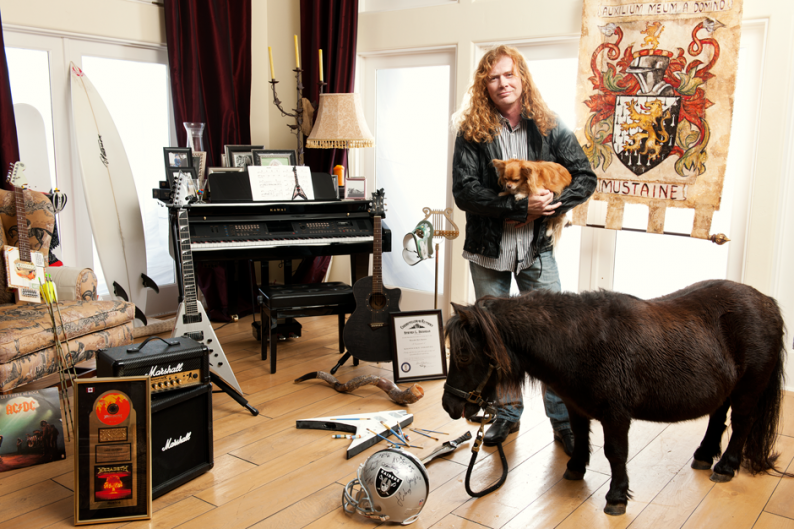 Dave Mustaine: We found him living in a parking lot with a bunch of junk cars around him. He had a little soul, and we just felt it when we saw him. We knew that he needed our help, you know? His hair was ruined, he was in really bad shape, he didn’t like people. And now he’s the friendliest horse — he’ll come running up to you no matter where you’re at. We live in kind of a hilly area. The coyotes, they come and lie down by him ’cause they know that he’s not a threat.

He was dribbling spit when you guys were doing the photo shoot because my wife was feeding him apples. I was like, “Don’t do that!” I know the green skin on the apples is gonna make green spit, and he’s gonna look like a rabid horse. We’ve had him inside the house, but it’s usually just for special things, like around Christmastime. We celebrate all of our animals. It’s pretty cool when you’re in that festive spirit because we believe in Christmas meaning a whole different thing — we believe that it’s about Jesus. So we’re all in a great mood when we’re doing our thing and giving out presents.

We’ve got gardeners who come once a week, so the back area, which is almost an acre for just him, is all nicely cared for. If there’s anything back there that can be eaten, he’ll eat it. He got out and was in the neighbors’ rose bushes once. Another time, it was late at night and I walked out of my house into my garage. I looked over by the pool and see these two glowing eyes. I thought, “Oh shit, it’s a bear.” The thought that my horse would be standing by my pool never crossed my mind. He’s learned to lean against the fence and break the fence — he’s done that several times. He goes to the other side of the fence where the grass is greener and just sits there and munches on it. He never runs away. He loves us so much.