No single album by the rapper Lil B matters for the same reason that no single painting by Andy Warhol matters. It’s less their art than their approach to making it, which is generous, carefree, and unedited. In Lil B’s Basedworld, quantity is quality, because quantity is evidence of a continuous and Zen-like passion for the present. Yes, he reminisces about the past — he’s a rapper; it’s required. The difference is that the past for Lil B isn’t some bygone era, but February 2012. In 2011, he released 13 albums and mixtapes — last month is history enough.

You could say that’s flooding the market, but you can’t call it a market if there’s no money exchanged, and with Lil B, there rarely is. He doesn’t make you pay for it, in part, because he loves you. He makes a point of saying this regularly and in exceedingly general terms. “First off,” he says, ten minutes into his new mixtape, “I want to tell everybody I love them, and I just appreciate being alive. You feel me?” In these moments, Lil B presents himself as a unisex, one-size-fits-all garment as broad as the sky: To not “feel him” is to deny the breeze blowing through your hair.

Great rappers are, above all, great personalities. Often, “great” means “complex” and “complex” means “contradictory.” Like Ghostface said in 2000, “Throw my hand all on the Bible and tell lies, too.” Great rappers are antiheroes, villains dogged by their consciences or sheriffs who bend the law in the name of enforcing it. God’s Father is the first Lil B release to demonstrate the full spectrum of his own personality. Some days he wants to give you flowers and grieve for relatives of yours he’s never met; he wants to hug you and weep and lament the way the Internet has destroyed the way we communicate with each other. The next day he wakes up and wants to shove his dick in your eye socket. For Lil B, the distance between acting like a Unitarian Preacher and a goon is the two-second gap between tracks on iTunes. 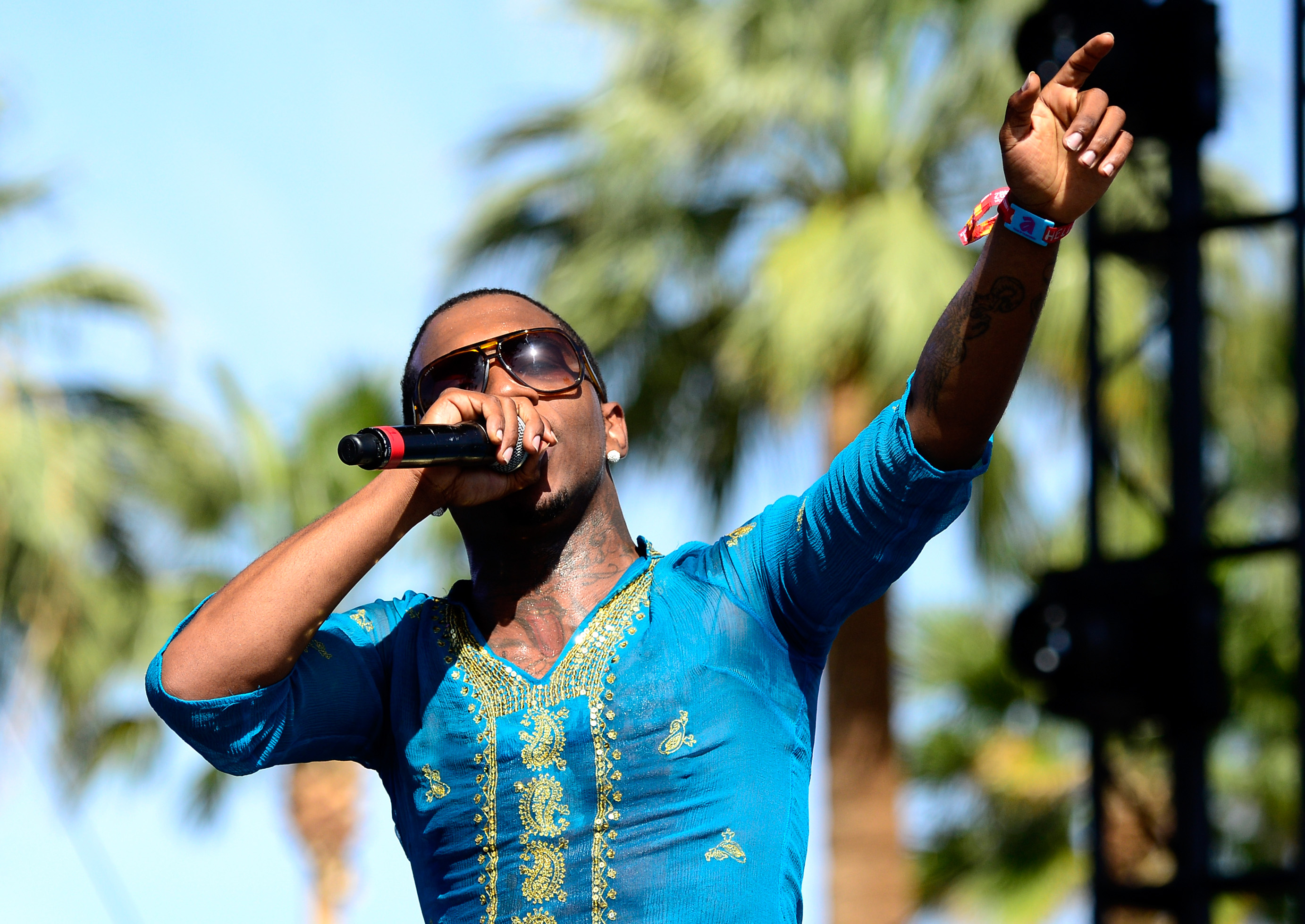 But he isn’t actually a sensitive thug or a conflicted criminal — he’s a student of rap in all its guises, and a populist who gives the people what he thinks they want. God’s Father features soul-rap comfort food; airy, blown-out New Age trip-hop; and the kind of blunt, reptilian aggression that Rick Ross has spent the past two years perfecting. What emerges isn’t a single complex personality, but a mind stimulated by playacting and fantasy. When he apes Wu-Tang, he shouts out Wu-Tang; when he feels like Danny Brown, he says so, adding, “I see you, so yeah, you did get famous, ‘cuz I’m talkin’ about you.”

None of these modes are permanent. Instead, they’re the modes of a child deep within make-believe. Lil B is the cop and the robber, the stolen jewelry and the bloodstain on the carpet. And when he slow-raps lines like, “I could bomb first or bomb last, I’m not greedy,” he’s the broken window and the sunlight shining indifferently through it.

God’s Father is, in that sense, the most fulfilling Lil B release yet. It is also 34 tracks and two hours long. He either has no sense of concision or no use for it. On some level, it’s always comforting to hear that Lil B isn’t rich but he’s happy, or that he thinks kids shouldn’t sell drugs, or that public transit is terrific. But trying to genuinely enjoy his second-hour forays into ’80s pastiche (“See Ya”) or rote revenge fantasy (“Turned Me Cold”) is like trying to genuinely enjoy a fourth plate from the buffet.

In the past he’s turned his inability to rap particularly well into both a comedy routine and a strategy to fish for the listener’s empathy. Here, though, it sounds like he not only figured out where the beats fall, but how many syllables to put in between them. Compared to early Lil B “hits” like “Wonton Soup” and “Ellen Degeneres” (which constitute some of the most unapologetically basic music ever released), tracks like “Tropics” are virtuosic — by which I mean they sound roughly like rap music: layered metaphors spoken rhythmically to a beat. When Lil B makes it to the end of a line like “I’m the top of the topic, all green like the top of the tropics / See me with the smart logic” or “Dude like me, man, I’m beyond hatin’ / I ain’t scared of hell, man, bitch I’m beyond Satan,” I feel a warmth generally reserved for watching overweight kids perform athletic feats without injury. Baby steps, Lil B; baby steps.

The Lil B on God’s Father is not a human meme or Twitter incarnate, but an older and more familiar story — the fractured self, the compulsive diarist, the one-man cottage industry, the prophet who plays the fool to keep the people entertained and the fool who occasionally lets slip the fact that he’s a prophet. On “February’s Confessions,” he raps, “I’ll be Albert Einstein times a million, bitch.” The content of the statement is that Lil B is a genius. The form of the statement suggests otherwise. It’s like rewriting the definition for “glass” as “something I can break.” Whether or not he realizes this seems immaterial: Logic, for Lil B, has about as much bearing on his music as farts have on international banking.

Earlier on the same track, though, he raps, “And if I wronged you in my past, I’m sorry / I suffer inside and that’s the worst thing for me.” At heart, Lil B is a hippie, and like a lot of hippies, he has a disarmingly simple way of reflecting the world’s complexity. In one particularly ruminative Facebook post from January, he wrote that he figured ants are just smart creatures trying to get by, but wondered if it was fair that “getting by” meant stealing his food.

No doubt, you might find these kinds of thoughts corny or just plain dumb. But consider the possibility that Lil B’s boundless appreciation for the world and his willingness to share is a healthy thing, especially when it comes free of charge. His most contemplative moments are a kind of spiritual dare: To cut loose from cynicism, to admire without posturing, to come clean and move on. “Don’t matter if you wrong,” he raps, “you gotta bleed to win.” He is his own proof. Take that how you will.

God’s Father‘s first track, “The BasedGods Layer,” ends with a bed of heavenly strings and Lil B saying, “Ah, so you finally met Lil B, huh? How was it? It wasn’t as bad as you thought it would be. Come outside! The Based God’s here, yes! This is amazing. Look at his face — he’s so happy!” Then, abruptly, “Close the door, we must leave. We must leave the Based God now. Let him rest. Let him be.”

The implication there is that public happiness carries a particular kind of burden. There’s a famous Steely Dan song, “Deacon Blues,” about a washed-up saxophone player wallowing in the dim glory of low-lit clubs and free liquor before dying in a car crash. Lil B isn’t pathetic, but at best, he documents a similarly unreasonable enthusiasm, an enthusiasm so na#239;ve that it sometimes seems like it might break him. “I cried when I wrote this song,” the “Deacon Blues” saxophonist confesses. “Sue me if I play too long.” Lil B’s love can be heavy and embarrassing, so feel free to be embarrassed for him. He loves, in part, so we don’t have to.