But the real question is: How does Julianne Moore's impersonation compare to Tina Fey's? 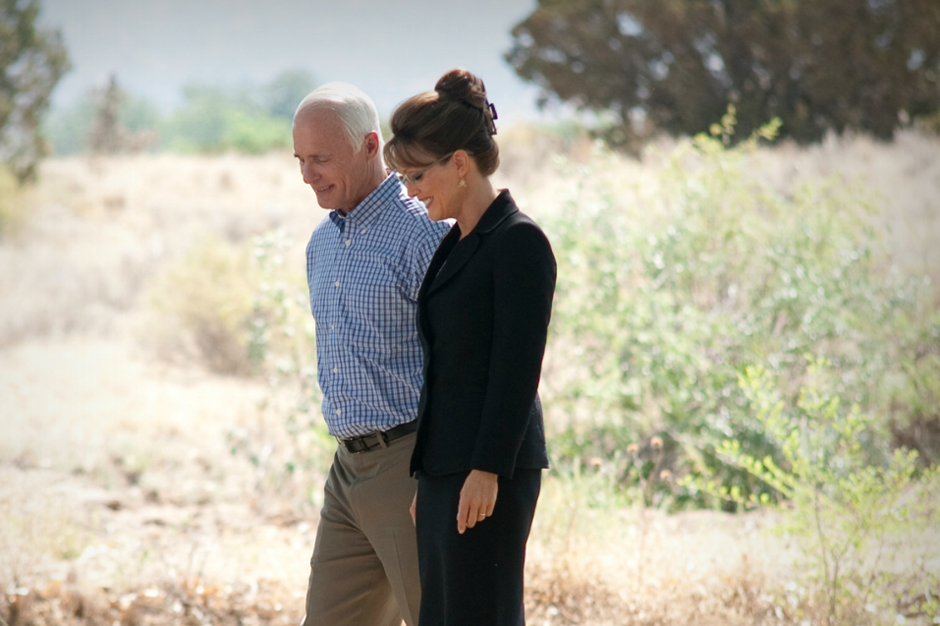 For a party historically famous for its discipline and devotion to hierarchy, the GOP’s lack of either in this election cycle seems unprecedented in modern politics.

Moderates are either rare as hen’s teeth or keeping so quiet they might as well be on the moon. The impossibly wealthy Mitt Romney, the presumptive nominee, is nowhere near as presumptive as he should be at this late date, with Gingrich and Santorum continuing to chew on his legs. Ron Paul is still out there coming at the party from wherever he is coming from. The Tea Party is either the most important factor in the American right or an accident of history that will die down. In the immortal words of William Goldman on the nature of Hollywood, “Nobody knows anything.” So what happened?

Sarah Palin happened, a moment and process that is chronicled with good-natured vigor in the enjoyable, but not tremendously revelatory Game Change, which airs Saturday on HBO.

In picking the governor of Alaska, the folks running McCain’s campaign thought they were getting a woman who could shore up the base and counter Obama’s rock star persona. Instead, they unleashed the goddamn Kraken, but not even in the way they quite realized.

It’s 2008 and things are looking weird for the McCain campaign. John McCain (Ed Harris, essentially playing a variation on Ed Harris) has gotten used to his status as a media darling, the Republican POW war hero that even David Foster Wallace wrote about. But he’s is trailing everyone else, and this Senator from Chicago with a name that sounds too much like Osama has changed the dynamic of the race.

In steps Steve Schmidt, a 38-year-old political consultant who aims to make some noise. Schmidt is played by Woody Harrelson, who left 38 behind around the time of EdTV, but adds gravitas to the role, I suppose.

Following the rule of Everything in the First 40 Minutes Should Be Exposition, we are told that McCain really wants Lieberman as his running mate, but his advisors can’t make the electoral math work.

Then, over gentle piano chords, there she is: Sarah Palin, played with staggering precision by Julianne Moore. BINGO. As Davis puts it, “She’s so passionately pro-life that at age 44, she decided to keep a child she knew mid-term had Down Syndrome.” (Hey asshole, there are plenty of folks who consider themselves pro-choice who would have made the same decision.)

Anyway, Palin seems like a magic bullet. “This is a woman with a gun, John,” Davis says. “The base is gonna be doing backflips.” She makes some folks nervous. Speechwriter Mark Salter (Jamey Sheridan) is convinced that her radical ideology will be dangerous.

Initially, Palin has an almost surreal fearlessness, calling her selection God’s plan and winning McCain over as “just Sarah from Alaska.” But as Game Change shows with candor, it becomes clear very fast that, well, she doesn’t know anything. The first red flag comes up from communications advisor Nicolle Wallace (Sarah Paulson, who seems to have a talent for playing thoughtful conservatives). She begs for some prep on foreign policy before exposing her to the media.

It also becomes clear that Palin’s vetting was fast, cheap and out of control mostly because a) the McCain advisors wanted it to work and b) it never occurred to them that you could get elected governor of a state without knowing that the Queen of England wasn’t the head of the British government. Oops.

Moore is amazing, throwing Palin between catatonia (when she becomes overwhelmed with debate prep and SNL’s parodies) and megalomania (most of the rest of the time). It’s jarring to see Moore as Palin watching Fey as Palin, a harsh reminder of just how seismic a presence she was and continues to be. But while Fey sort of looked like Palin and was poking fun, Moore is trying to get into Palin’s skin.

Palin delivers like Domino’s at the convention, turning into a rock star overnight. But she goes bonkers whenever facts get in the way, bombing an interview with Katie Couric, then hissing and screaming at Wallace for prepping her wrong and becoming a constant thorn in Schmidt’s side. (The single funniest line comes when Schmidt tries to buck up a near-inert Palin: “I think you need to get off this no-carb diet immediately.”)

By the end, she is demanding microphone time during McCain’s concession speech, which would have been unprecedented. Schmidt ain’t having it; the scene where he practically cries apologizing to McCain for even pointing her out in the first place is weirdly touching.

Like most biopics, Game Change feels like an exercise in how well the star can imitate the main character more than anything else. But here, that’s enough because the punch line is that Palin was sort of correct. She meant something party traditionalists couldn’t contain. By the end of 2008, the country had Obama, but its discontents had Palin, the symbol of the moment when the GOP base smashed into pieces. As Salter says to McCain after losing the election, “You just might lose your reputation right along with it.” McCain has done okay, but it’s the party Palin managed to destroy.