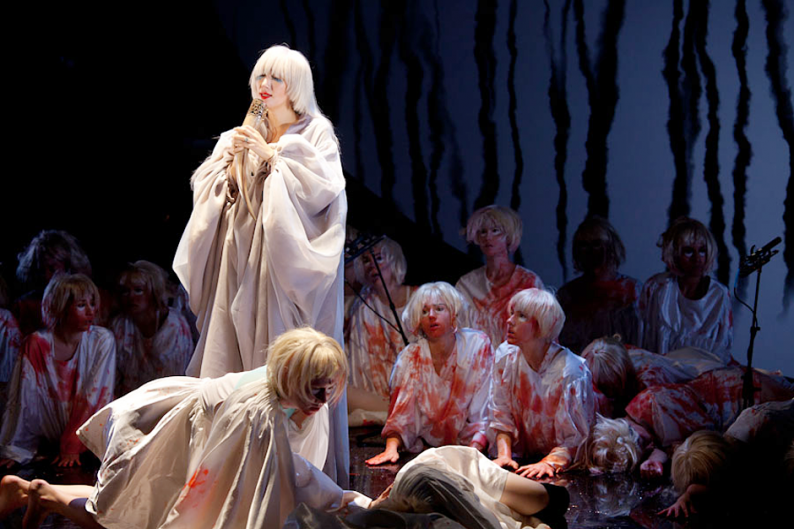 In 2005, Karen O made a secret solo album she now describes as both the “ace up my sleeve” and the “albatross around my neck” — an intensely personal cycle of songs she hesitated to share with the world. In 2011, she finally unleashed those tracks via her manic, grisly, fascinating “psycho opera” Stop the Virgens, which premiered at Brooklyn’s St. Ann’s Warehouse as part of the Creators Project’s October festival. The show and its background have remained fairly shrouded in mystery — until now. SPIN is psyched to be the first to bring you a behind-the-scenes documentary by the Creators Project (a collaboration between Vice and Intel) that explores how Virgens came to life via interviews with the Yeah Yeah Yeahs frontwoman and bandmate Nick Zinner, co-creator and production designer K.K. Barrett, director Adam Rapp, music co-director Sam Spiegel, and Karen’s ever-innovative costume designer Christian Joy. Extra bonus: You can get a peek at the Virgens songs that have yet to get an official release and see footage of Karen and her crew of “virgens” in rehearsals. As we put it at the time, the Virgens tracks “hopscotch from jazzy, cabaret ballads to 1950s soda-pop rock, vicious punk to swelling psych rock.”

“The experience of making Stop the Virgens completely changed me as an artist,” Karen says in the doc. “It was the first time I made something that was so euphoric and so free of suffering or frustration or pain.” She explains she started writing the music with Spiegel when she moved to L.A. and had little on her plate. The songs came quickly (most were written within two weeks), but O kept them on lockdown. “What it represents is an autobiographical, emotional journey for her that’s very raw,” Rapp says. Here’s a rare look at the show from its earliest stages to opening night: