Damian Abraham not a fan of her 'Part of Me' video 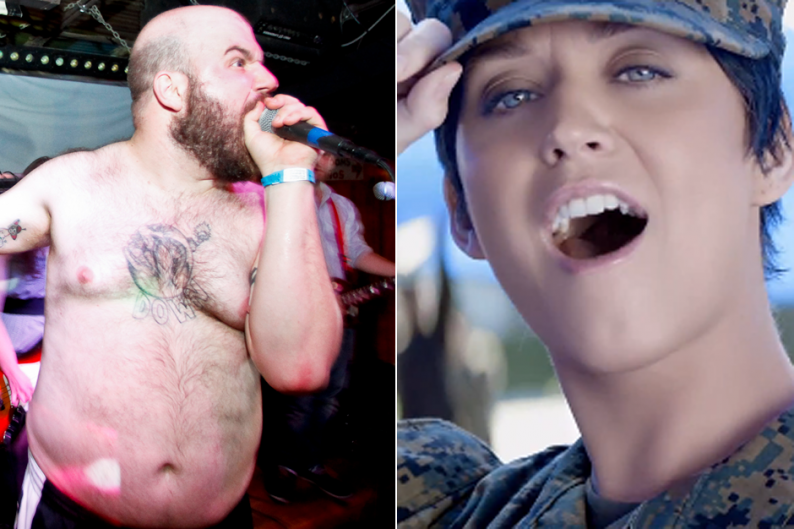 Katy Perry may have thought she was big-upping the military by including soldiers in her recent “Part of Me” video, which has the singer decked out in camo at boot camp, then on a battlefield (with a cast of real Marines) after being cheated on by her boyfriend. But Fucked Up frontman Damian Abraham sees her clip differently.

Abraham, whose David Comes to Life rock opera was SPIN’s favorite record of 2011, stoked the (quite easily stoked) flames of Perry rage by tweeting, “Seeing Katy Perry as a soldier in ‘Part Of Me’ really makes me think that we need to start a war so she can go die,” then followed up an hour later with a qualifier: “Yes I’m aware my last tweet was kinda dumb but so is glamorizing war to sell records to idiots. Katy Perry Still Sucks.” He next proceeded to retweet all the enraged death threats sent his way by Perry’s very dedicated fans — of which there were, of course, many. For what it’s worth, he almost feels the same way about the Black Keys, who he has, ironically, called “Nickelback for hipsters.”

KP herself hasn’t responded to the hate bait yet, but after the past few days, in which she’s been criticized for the clip’s propaganda-y nature, it’s likely she’ll have something to say about it soon, especially considering she told Rolling Stone last June, “It just feels like the thing running our country is a bank, money. I know it sounds like an intense viewpoint, but I’m only slowly but surely getting the wool taken off my eyes… Our priority is fame, and people’s wellness is way low. I say this knowing full well I’m a part of the problem. I’m playing the game, though I am trying to reroute.”