Odd Future members Jasper Dolphin, Taco Bennett, and Lionel Boyce made auspicious steps towards stardom by appearing in their BFF Tyler, the Creator’s video for “Bitch Suck Dick” — Jasper had a plus-size workout, Lionel ripped open his shirt, and Taco sat bare-assed on a filet of Waygu beef (we’re assuming it’s Waygu — only the best). And though Boyce just wrapped up a stint writing a deeply enjoyable column for the LA Weekly (and performed 2011’s funniest rap skit, “L-Boy Interlude” from Domo Genesis’ Under the Influence), these guys are decidedly lower-profile than Tyler and the prodigal Earl Sweatshirt.

All that’s about to change. On March 25, Loiter Squad will debut on Adult Swim, and along with Tyler, these three will co-produce and star. A sketch and stunt show presented by Dickhouse—the production company that brought us Jackass — the clips are written almost entirely by the quartet. (Our most anticipated character: Tyler, the Creator’s “Fernando” — a libidinous Mexican dance instructor with a paucity of shirts.)

Because we’re almost sure their screen careers won’t stop at Adult Swim, we sat down with Taco, L-Boy, and Jasper on the Loiter Squad set last October in Seattle to discuss working at Hollister, the Ninja Turtles, crying, and other raisons d’etre. 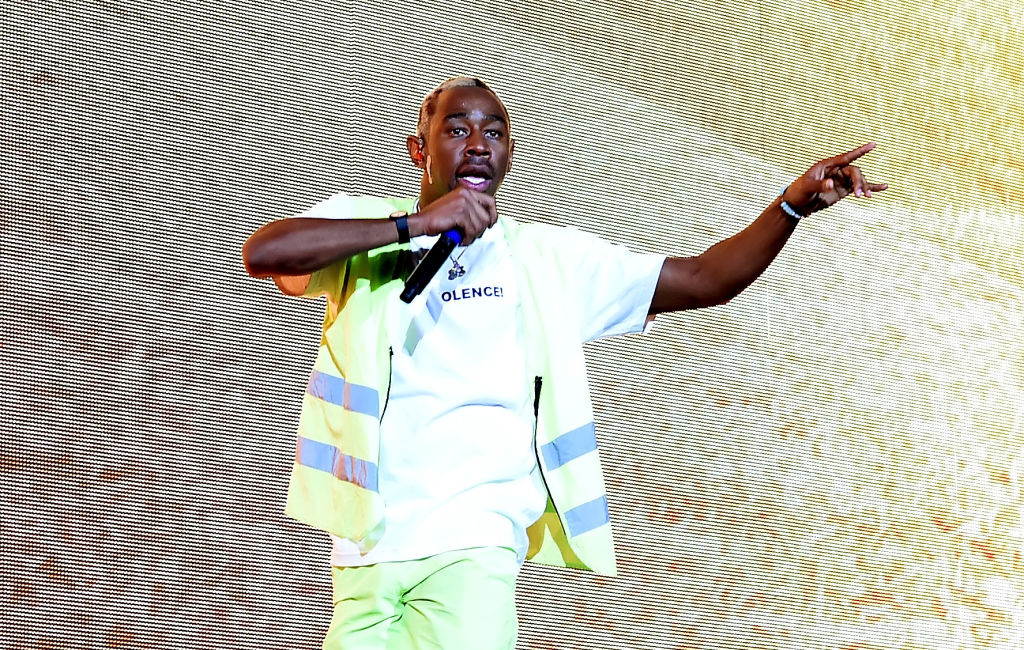 Do you go on tour with Wolf Gang a bunch?

I’ve been to shows in Cali with them #&8212; Coachella, a couple in San Diego. I was in school, though, until last spring. I was taking classes for behavioral sciences, like psychology. I like psychology, learning about the disorders and everything is cool.

Yeah, those are the best ones.

Like that book, The Man Who Mistook His Wife for a Hat?

I never heard of that. That’s crazy. She didn’t even look like a hat, I’m sure.

When you got out of college did you have to get a job?

I worked at Hollister.

Were you one of the dudes with zinc on your nose and swim trunks and no shirt?

I never had to be one of the topless models. They used to use me for casting calls, though. Like lookbooks. I never seen ‘em. They’d give us the clothes to put on and do the pictures, I did a winter one and a back-to-school one.

Your column for the LA Weekly is really funny. When did you start writing?

Well, I been writing my whole life in school, because, you know you have to do papers and stuff. I just thought it would be pretty cool to get a column to talk about whatever I want, to just let people see what I think in my head on a regular basis. It gets pretty crazy in there. I didn’t know you could cuss in the newspaper, so I just make it a point to cuss every week.

Are you doing what you’ve always wanted to?

Well, I really wanted to produce film and TV shows, like the show we have. Me, Tyler, Jasper, and Taco are the four main producers on Loiter Squad. They hired some writers to bounce around ideas, but mainly it’s us four just coming up with the biggest chunk of everything. I wanna branch off into movies and stuff, too: writing, producing, and acting. I’m trying to stop people saying, “Oh, Lionel Richie,” when I tell them my name’s Lionel. I don’t have a jheri curl. He has a cool moustache at least, I’ll give him that. But I couldn’t’ take him seriously with that jheri curl. Imagine someone with a jheri curl getting mad at you? You’d just laugh. You couldn’t take them seriously. Juice dripping off, telling you to go to your room.

Earlier you told me you really wanted me to write that you’re not a rapper. Do you consider yourself a hype man?

Yeah, I like being a hype man, it’s fun. I get to yell other peoples’ lyrics and yell at people in the audience. During people’s verses, I be yelling the most random shit, like, “That baby ain’t mine,” or “Cut the fucking cake.” Whatever comes to my head in the motherfucking mood.

Do you remember when you first started hanging out with Odd Future dudes?

I went to high school with Tyler, we lived across the street from each other. We started out as enemies. He had this stupid-ass jacket and I hated it and I had a wallet chain and he hated that. But then he found out I had an Xbox with Tony Hawk’s Project 8, and then we became friends. Xbox brought us together.

So tell me about why you like Miley Cyrus.

She’s a fucking angel, I love her. It all started with her TV show, I love Hannah Montana. And I love her music. There’s a difference between Hannah Montana and Miley Cyrus music. Miley is more like, me. I was in the same room as her and I look to my left and she was just sitting there. I was like oh fuck. Hey Miley! I love you! Look at my shirt! Because I had a shirt on that said, “I Heart Miley Cyrus.” And then we started talking and made a nice connection. Next time I see her I’m gonna try to get her number so we can do nasty stuff together.

They’re cool, they do flips, and they like to have sex for pleasure, not just to make kids. They’re the only other mammal that fucks for fun besides humans.

What do your parents think about what you do?

They love it, they’re the biggest fans. My mom sits on the computer and looks at what the fuck is going on with OF all day. My dad says he wants to be on Loiter Squad… and he’s gonna be on the show, but he’s so pressing me like, Is it my turn yet? And I’m like just wait, we will have you when we need you! My dad’s an ex-gangbanger but he’s just one of them dudes that’s funny all the time. And I have one older brother, he’s the exact opposite: I’m short and fat and he’s tall and skinny. He’s going to school to be a cop, and I’m in a rap group, so.

What’s the best thing about being in Odd Future?

I don’t have to work a normal job, or wear a suit. I can just be free and make good money. My parents wanted me to get a job but a minute ago I was just like, I don’t need a job I’m gonna be famous and they just laughed at me. Now look at me: BOOOO-YAAAAAA!

What were you studying in college?

My major was mathematics, because I do like math. I wanted to do something in math or web design, those are my main things. I was thinking about going into banking because I have an uncle who’s a banker and I thought that was kind of an easy way to just like chill around a lot of money.

What is one of the skits that you’re most proud of that you really want to do?

I really want to do this one where the son is a child molester and he’s raping the dad. And the dad is telling the mom Honey, don’t go to work tomorrow! And the son’s like, Dadddyyyyy. I think that’s funny! I don’t know if they’re gonna let us do it, but I’m gonna try to get that on the TV. If they don’t let us do it, it will have to be on the unrated version.

What was the first music you really liked?

The first CDs I ever bought: a D12 CD, I can’t remember which one. Usher’s 8701 and the Gorillaz album. Those were the only ones I ever bought in my life. Then I used to listen to WWE music, Disney Channel music, and Eminem. WWE used to be the shiznit.

Did you see The Wrestler?

Nope, but I saw Nacho Libre and that shit was funny. But my favorite movie is Teenage Mutant Ninja Turtles Part Two: The Secret of the Ooze. It came out in like ‘90. I was a bigass Ninja Turtle fan when I was little, then they kind of faded off, but that didn’t stop me. They’re Ninjas! They’re Turtles! And they like pizza!

So you guys are famous now. How does it all affect you, since you’re still in school?

When Tyler released Bastard, kids at school would be like, “Ahahah, I heard you eating chips and shit, you funny.” Then it gradually grew into random people wanting to hang out with me. But then last year, when “Yonkers” came out? Every kid in school was trying to be my best friend. Well, I went to the continuation school, for dumbass kids who fucked up, which is right next to the big school, and none of the people at the continuation school gave a fuck. And now, all my friends are older than me. The closest to my age is Thebe [Earl Sweatshirt]. Now I’m home-schooled. So this morning, before filming, I go to an on-set teacher. I woke up at 6:30, went upstairs from my room and sat there for three hours drawing bottles for an art assignment. It was horrible. But yeah, I kiiinda got kicked out of school. The principal was like, you should just leave and go do some other shit. And I was like aight.

So you and Jasper are thinking about putting out a mixtape.

So is Loiter Squad what you want to do with your future?

I don’t know. I’m only 17, so I have some time. And having this much money at 17 is just like, it kinda fucks you up. I bought my laptop, an Xbox, some basketball shoes. The rest is in the bank. I still eat McDonald’s every day. There’s no point in changing shit, like I shouldn’t be going out to Benihana’s every night just cause I have money.

Do you and your sister Syd the Kid fight a lot?

Nah, we used to. I kinda got good at taking hits, just hanging around with the people I hang around with. And then you start a TV show with Dickhouse, you’re always vulnerable #&8212; I stay being like this [shields crotch]. If you came to the office — the OF office, the Dickhouse office, every office that we hang out at—everyone walking down the hall is like that.

What was your reaction when you found out Loiter Squad was going to be a real show?

I saw it come up on Twitter, and I started tearing up and stuff. I’m the crybaby when it comes to cool shit, like, I cried when Jimmy Fallon happened. In the studio, everyone was looking at me and I was like, “I’m not crying man, it’s just hot as fuck in here!” After it aired, I called Tyler and he goes, “Are you crying?” And I’m like, “Yeah, I’m crying, fuck it.” Fuck you. I’m crying.