Defend Yourself, Justin Hawkins of the Darkness!

Home » Features » Defend Yourself, Justin Hawkins of the Darkness!

Justin Hawkins, frontman for recently reunited hard rockers, the Darkness, has lived a life that has simultaneously conformed to and satirized just about every cliché rock ‘n’ roll has to offer. He formed the band over a decade ago with his guitarist brother Dan, and rose to prominence singing wonderful, flamboyant, cheeky odes to love, jealousy and genital warts and performing them decked out in full-body spandex catsuits while occasionally riding a stuffed white tiger. The band’s 2003 debut, Permission to Land, made them huge stars in the U.K. and Hawkins reveled in playing the part: He indulged in food, drink and drugs, talked shit about other rock stars, and engaged in an on-again, off-again relationship with the band’s female manager that caused problems within the band. The Darkness’ second album, One Way Ticket To Hell and Back was the expected sophomore slump, an expensive, overblown mess recorded in a half-dozen different studios and featuring, among other things, Peruvian panpipes, lots of synthesizers and the sound of someone snorting a line of coke. In 2006, Hawkins did a stint in rehab and quit the band. After a brief unsuccessful attempt at representing his native England in the Eurovision Song Contest, he formed a new band, the similarly inclined Hot Leg, who failed to gain much traction. The rest of the Darkness stuck together under the moniker Stone Gods, grinding out more straightforward rock to diminishing returns.

Last summer at the Download Festival, the Hawkins brothers, along with bassist Frankie Poullain and drummer Ed Graham, succumbed to the inevitable and reunited. A new album is slated for this spring. SPIN caught up with Hawkins as he and the band rehearsed for their North American tour and gave him a chance to answer for his apparent misdeeds.

The Darkness reunion is just a blatant cash grab.
[Laughs] Yeah. That’s one of the things we were concerned that people would think. That was one of the reasons we hesitated to take the Download slot last year. Half of us were like, “Should we do this?” and the other half rightly said, “What the fuck are you talking about? Any band in the world would want that slot! Of course we should do it!” If it was a cash thing, I think it would just be a festival run and that’s it. But it’s not. It’s a continuation of an artistic endeavor that many people thought was over. I always said we’d get back together.

You would never have reunited if your separate projects were better received.
I think we would have but there would’ve been less pressure and people wouldn’t have accused it of being a cash grab. You can’t have it both ways. It’s either a cash-in or it’s desperate. If our projects had been more well received then we would’ve reunited and it would’ve been enormous. We actually talked about doing the Sibling Rivalry Tour where Hot Leg, Stone Gods and the Darkness all play together and fight for the top billing. But unfortunately the previous projects weren’t well enough received to make that worthwhile. 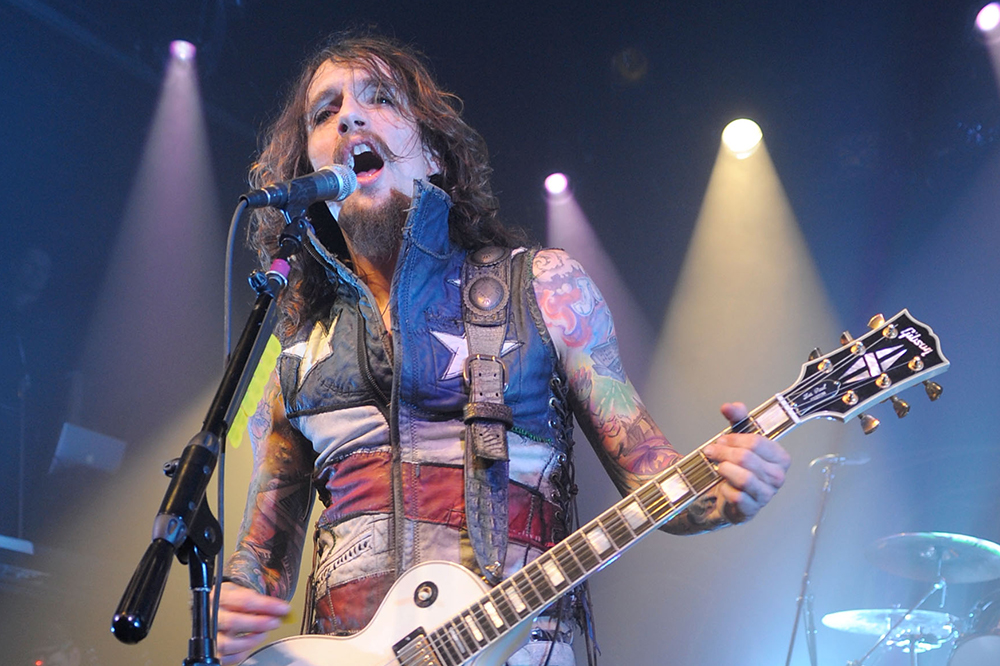 I’m not answering that one. Move on. —Justin Hawkins

All the band members still hate each other.
[Laughs] Yeah, we all hate each other. That’s why we make great music. You can’t make fire without friction. Well, maybe you can, but it’s like a chemical fire which would tear your skin off.

The only reason you guys were able to let bygones be bygones is because you were all too fucked up to remember what happened back then to make you so angry at each other.
Time is a great healer. As is sobriety. It’s the old, “What were we actually angry about in the first place?” When you’re small-town guys that become a big-time band, you lose sight of a lot of stuff. Then when we first sat down together again it was like, “Yeah, this is nice.” So maybe that’s true. But the mending process has been going on for years and years.

All your drinking and drugging was meant to be ironic.
I don’t know what you’re talking about. I didn’t take any drugs. I only drank socially. [Laughs] My problem was food. I couldn’t resist food. But I’m using a calorie-tracking app now. I go through a lot of greenery. I’m into steamed vegetables, which is something I picked up off the My Chemical Romance lot. One of their guys told me they just eat steamed vegetables all the time. And they look a lot younger than they are. Y’know, they’re 50.

Competing in the Eurovision song contest was proof that all the drugs hadn’t left your system yet.
[Laughs] I’m not answering that one. Move on.

Russell Brand was playing you in Get Him to the Greek
I thought Get Him to the Greek was quite dark actually and bit unsavory. Everyone else was going, “This is really funny!” And I was thinking, “Why do I find this dark? Why am I the only person that’s not laughing at this?” So maybe you’ve got a point there.

This new album is just a bunch of songs leftover from your other projects.
No, but some of them are things we were working on back in the day. Three or four of them are old bits that we’ve picked up, dusted down and looked at without the bleary eyes. The new album sounds like the first album but bigger. Everything just sounds shinier. But there’s no panpipes, no synthesizer solos. It’s small town, big heart rock with added shininess.

You’re a control freak.
How very dare you? A control freak? Yeah, maybe. I actually like that charge. I would plead guilty on that one to be honest. With the Darkness, part of the reason why it works is because of the battle. Everyone fights everything in a writing scenario, and what we now realize is that’s what’s great about it. So we’re all control freaks in different ways.

You clown around so much onstage and in your songs because you are afraid of revealing your true self to anyone.
Um…[long pause]…I don’t clown around. I present the songs in nature’s way. Besides, you can do whatever you want as long as the material is right. As long as the foundation is a great song, it doesn’t matter what you do, you can’t fuck it up even if you tried. And I know this because I have tried. As long as you’re writing great songs you are untouchable and an artist. Because if you think about it, somebody who is writing shit songs and behaves like an idiot nobody cares about, but if somebody writes great songs and behaves like an idiot, that just makes them more fun.

You’ve lived out every rock cliché in history.
No, I haven’t because I’m still alive. I would’ve died last year had I have done every cliché.

Your entire career has been one long performance art piece meant to lampoon the nature of rock stardom.
[Laughs]. I have no choice but to deny that until the final act is performed. But I suppose the first part of it was definitely a performance of sorts. I’m just waiting for the next act, I suppose.