Fiendin’ for a TGIF stack of vinyl? Please start here. 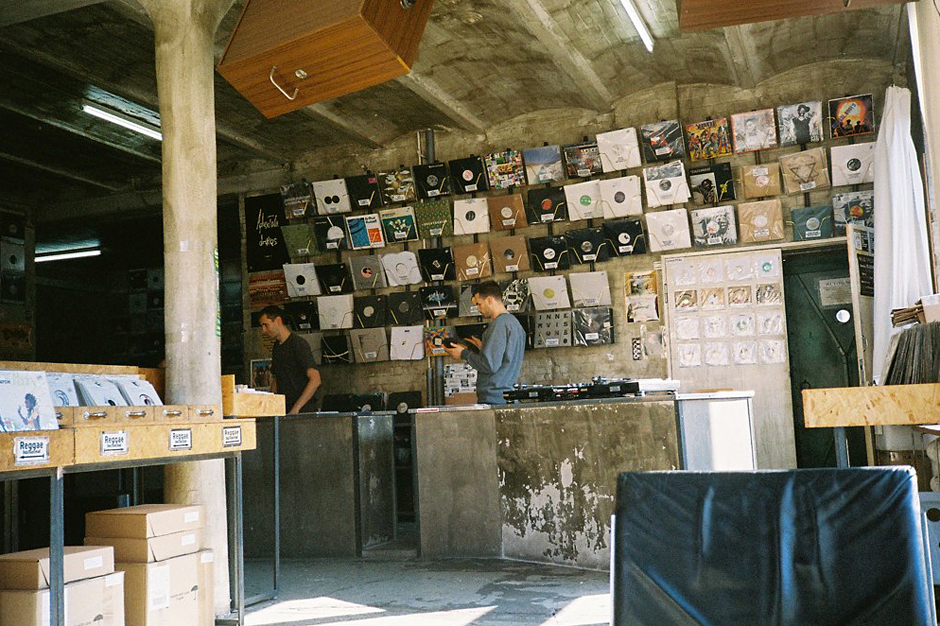 There’s no real theme to this week’s Friday Five — just a selection of records I picked up on vinyl last week that I’m eager to share. Actually, maybe that is a sort of theme, after all. With so much of the dance-music discourse driven by publicists, blogs, and all the other usual buzz-making suspects, sometimes it’s refreshing to get offline and simply go to the shop, buy some records, come home to play them, and talk to your friends about what you’ve heard.

I used to go record shopping every week. Hell, multiple times in the same week. There was a time, in the flush 1990s, when I spent more on records than I did on rent. But in the past year, my record shopping has been relegated largely to the internet, aside from trips to the flea market in search of bargain finds.

Last week, though, pining for new wax and inspired by uncharacteristically spring-like weather, I trekked to Hard Wax, the famous record store in Berlin’s Kreuzberg district. To call Hard Wax iconic is no overstatement: affiliated with Berlin’s Basic Channel and Chain Reaction labels, it’s taken on an almost mythic status for its carefully curated selections of house, techno, dub reggae, and dubstep. Tourists don’t just visit, they make pilgrimages: When I went last week, there was a Spanish couple having their picture taken in the graffiti-covered stairway outside. Inside, customers jostle to get their hands on the lone open copy of a given release. Queuing for a listening station, they eyeball each other’s armloads, making mental notes on new releases or forgotten back-catalogue finds. If you’ve been going there as long as I have, the staff presses suggestions into your hands; they’re usually keepers, as was the case with the records below.

SBTRKT “Pharaohs (Braiden Remix)” (Young Turks)
Ah, the blink-and-you’ll-miss-it white label, the lifeblood of dance music. Here, we get reduced, jacking, almost bluntly functional reworks of two SBTRKT album cuts from Lil Silva, a mainstay of the UK funky scene, and Braiden, a London DJ with a slim but distinguished catalog. (His debut single came out on Joy Orbison’s Doldrums label; last year, he remixed Jacques Greene for LuckyMe.) Lil Silva’s mix is fun, if a bit one-note — its main trick is to contrast Sampha’s supple, aching voice with brutish bass and drums — but Braiden’s mix is just flat-out weird. The bumping, determined machine groove is straightforward enough, yet the song’s harmonic dimension is a tangle of dissonant counterpoints that just pull you deeper inside. It sounds frankly wrong, at first, but the more you listen, the more its clashing keys take on a kind of internal logic; it reminds me of old dub records where vocals from one session have been grafted to a backing track recorded in a different key. The result is a manic, druggy clarity, with the singer Roses Gabor strafed by errant lasers. “Invigorating” doesn’t begin to describe it.

MMM “Meets Tshetsha Boys” (Honest Jons)
Honest Jons’ new double-CD compilation Shangaan Shake is rooted in the album Shangaan Electro, a 2010 collection of sing-songy, hyper-speed dance music from South Africa. (Check out a clip of Tshetsha Boys’ “Nwa Pfundla,” featured on the album, to get a sense for the music’s triple-time skip and plinky Casio-tone melodies.) There’s no shortage of brilliant remixes and reinterpretations on the new comp: Mark Ernestus, Oni Ayhun, Actress, Theo Parrish, Peverelist, Ricardo Villalobos, and Max Loderbauer. It’s kind of a who’s-who of next-level beat makers, producers so in command of their warped grooves, they seem to inhabit some kind of non-Euclidean rhythmic plane. But the mix that really jumped out at me, and which I sprung for on wax, comes from MMM, the Berlin-based duo of Errorsmith and Fiedel. They’re best known for jacking rave bangers of the sort they’ve been irregularly turning out since 1996, but they take the opposite tack on their rework of Tshetsha Boys’ “Nwa Pfundla,” setting the lilting vocal against a spacious, swinging drum track and little else. The song’s main feature is a deep, resonant synthesizer line that’s clearly meant as a kind of homage to the Tshetsha Boys’ robo-kalimba. While not nearly as breakneck as the original, it’s still fast, rolling along at 136 beats per minute, or roughly dubstep tempo. You can pitch it down, however, to slot it in alongside house and techno, where the empty space opens up and the bass frequencies turn absolutely gooey.

B.D.I. “Decoded Messages of Life & Love” (Rush Hour)
I’ve had the two tracks off this EP on MP3 for months now, but it’s one of those records that I felt like I needed in physical form. Maybe that’s because the sounds themselves are so physical — all cowbell clank and crumpling metal and rainstick shimmy, with a bass line that sounds like a steel drum half full of water being rocked in slow circles. There are two distinct energies at play: one is an elliptical, almost incidental swaying motion, the other a boom-clap one-two punch as regular as clockwork, and it’s the interplay between the two types of drive that makes the song’s unusual cadence so spellbinding. There’s a nice cottage industry in this kind of broken-down, industrial-tinged techno right now — Afrikan Sciences, Mark du Mosch, Vessel, El Kid, BNJMN, Yør, Andy Stott, Claro Intelecto, Hazylujah, et al — but this track might be the funkiest example of the sound.

Hunee “The Lowest Animal” (Dekmantel)
Stick a handful of pins in the world atlas of electronic music, and you’ll probably pick out nodes like Detroit, Chicago, London and Berlin. But reserve a few for Amsterdam, Rotterdam, and other cities in the Netherlands. Between labels like Clone, Bunker, Rush Hour, Delsin, Crème Organization, and dozens of smaller imprints and sub-labels, the Dutch have done more than their fare share to keep underground house and techno vital over the past decade or so. Since 2009, Dekmantel label has kept up its part of the bargain with deep, chugging releases from artists like San Proper and Juju & Jordash; an ongoing series of 12-inch singles, eventually to be compiled on CD, celebrates five years of operation (they began as party promoters before launching the label) with exclusive tracks from Morphosis, Awanto 3, Lone, and other friends of the label. Again, I’ve had the tracks digitally for months, but Hunee’s “The Lowest Animal” didn’t really grab me until I heard it on wax. The effect is subtle, but the bass takes on a thick, wooden heft, the hi-hats seem to spark across the surface of the music, and queasy, mid-range pads all but detach from their moorings, gliding like ghosts through the ruckus. It’s also worth pointing out that the color of the vinyl is the most perfect green I’ve ever laid eyes upon. Fittingly, I suppose, given the source.

Pev “Erosions”/”Salt Water” (Livity Sound)
The super-rich can buy seats on commercial space flights, but the closest that most of us will ever get to experiencing zero gravity may be in the music of Bristol’s Peverelist. His grooves, while aimed straight at the dance floor, are nonetheless unusually disorienting experiences: rhythmic elements seem to float in thin air, colliding and ricocheting in dizzying fashion. He gets his busy, intricate percussion from dubstep, but he removes the emphasis on the downbeat in such a way that leaves you twitching on tenterhooks. “Erosions” and “Saltwater,” from the third installment of his vinyl-only Livity Sound label, offer complementary takes on his hyper-kinetic style, with snares and kicks fluttering angrily against a backdrop of moody synthesizers and billowing dub delay; each track is a master class in syncopation and counterintuitive pulse.