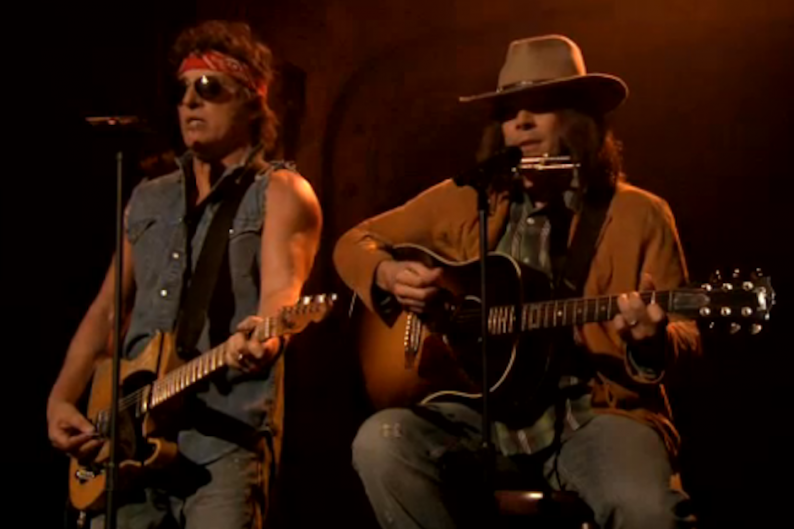 In November 2010, Jimmy Fallon and Bruce Springsteen covered Willow Smith’s neck-snapping “Whip My Hair,” with Fallon impersonating Neil Young and Springsteen impersonating, well, himself. Fallon has since dusted off his pitch-perfect Neil impression for a Miley Cyrus cover with the rest of Crosby, Stills, Nash, & Young, and just last month Fallon posed as Eddie Vedder for a Pearl Jam-style tribute to the NBA phenomenon known as Jeremy Lin. Friday night, at the end of a week-long Springsteen tribute on Late Night With Jimmy Fallon, the host and the Boss reunited again — to perform LMFAO’s ridiculous, pretty-fly-for-a-white-guy mook-pop hit “Sexy and I Know It.” Which, let’s face it, is pretty much its own Weird Al parody to begin with, right down to the hair and glasses.

Fallon brought a perfectly deadpan expression to the performance, recalling Harvest-era Young with his acoustic guitar and harmonica. Springsteen joined him in his Born in the U.S.A.-era guise, complete with red headband, cut-off jean jacket, and anthemic crowd sing-along: “Wiggle, wiggle, wiggle, wiggle.” It’s worth it just to hear the Boss rumble gruffly, “I’m in a Speedo tryin’ to tan my cheeks.”

In actually good music news, Springsteen closed out his week on Fallon with a massive rendition of 1973’s “The E Street Shuffle,” backed by the E Street Band, Rage Against the Machine’s Tom Morello, the Roots, and of course, Fallon. Springsteen’s new Wrecking Ball is out tomorrow, and his tour with the E Street Band begins on March 17 in Atlanta, where fans will be able to see for themselves in person if the Boss works out.