A month after announcing its initial lineup, Bonnaroo has added a handful of fresh acts to its bill (via Consequence of Sound). The caravan heading down to Tennessee June 7-10 will also include Maynard James Keenan-fronted Puscifer, the highly synchable fun., the highly mashuppable Santigold, the Temper Trap, and the Cave Singers.

Glenn Danzig is also slated to perform a “legacy” set, which is supposed to include Misfits/Samhain/solo Danzig material, but after last year’s Fun Fun Fun madness, we’ll believe it when we see it. Maybe he sees ‘Roo as a place of redemption — but only if the bands there tip their caps to the Misfits.

This year’s Bonnaroo will be headlined by Radiohead, Red Hot Chili Peppers, Phish, and Skrillex. More acts are supposed to come soon, say the fest’s organizers via Twitter, including a “full comedy lineup.” Start getting psyched for this year’s Manchester throwdown by checking out SPIN’s best pictures from Bonnaroo 2011. 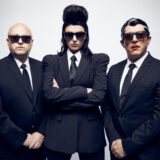 The official Bonnaroo 2012 lineup so far: