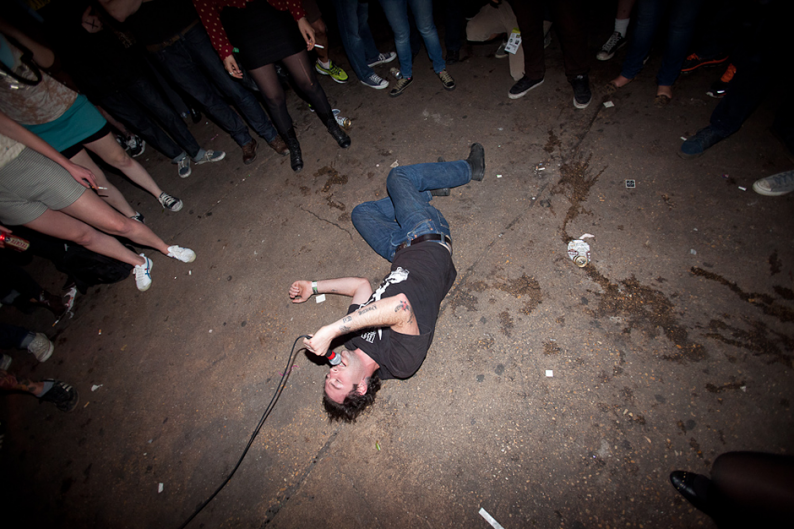 Sleigh Bells: SXSW usually manages to cram a few poppy voices in amongst the rackets, beats, shouts, and rhymes emanating from the city’s billion clubs. A few years ago, Robyn gave a breakout performance at Perez Hiton’s party, of all places. This year’s breath-of-fresh-air was Alexis Krauss, a.k.a. half of SPIN cover stars Sleigh Bells, who wrapped their VEVO-broadcasted set at Austin City Limits Live as forcefully as they’d started it, thick beams of red light cutting through the air with as much power as Derek Miller’s beer-shaking riffs. Krauss charged around the stage, marching and kicking, finally landing in the crowd, flat on her back, singing “End of the Line.” Not a bad way to end four days of nonstop noise. CARYN GANZ

Ceremony: South by Southwest is one big photo op. Ross Farrar, singer for veteran northern California hardcore act Ceremony, currently nudging themselves toward the center via their amazing, just-released Matador Records debut Zoo, knows this and knows how to work it. Scaling an amp stack to dangle from the rafters of Red 7 during the new song “World Blue” was equal parts theatrical and confrontational, while every bit of writhing in the pit, or at least as far into the pit as the mic cord would allow, was perfectly tailored to the dozens of cameras shoved into his face looking for that emblematic shot of spastic punk energy in full bloom. But it was during an unexpected lull during a technical snafu that Farrar’s charisma was put to its fullest use, as he stalled for time by interviewing fans with an ease and confidence that Conan O’Brien didn’t manifest until his third year on the air. Why is that important or relevant? Because so much of hardcore is about the desire to be respected; Ceremony want to be enjoyed. STEVE KANDELL

Lydia Loveless: A tiny slip of a blonde in a frilly skirt and cowboy boots, who on first pass may look like a headstrong brat playing dress-up and struggling to hoist a normal-sized guitar, Lydia Loveless is, in reality, one of the most badass country or Americana or rootsy-fartsy songwriters working today. Her Red Eyed Fly set at the Bloodshot Records showcase was a revelation. The Columbus, Ohio native’s 2011 album Indestructible Machine rivaled any hardcore outfit for sheer punk bluntness, yet its snarling, voluble, heart-busted, honky-tonk narratives were both painfully intimate and craftily sophisticated, like every misbegotten 3 a.m. e-mail sent to an ex or asswipe acquaintance you met at a bar, rendered into a wailing shot-from-both-sides jukebox classic. At her best, Loveless is like late-era Lucinda Williams fueled by early-era Miranda Lambert’s bright-eyed revenge; and she’s got a seasoned band — Todd May on guitar, Ben Lamb on bass, Parker Chandler on drums — that gives the songs a coolly rollicking foundation. Loveless may not even be a household murmur right now, but she’ll get hers soon enough, and the old alt-country guard better look out. The Red Eyed Fly show’s high point was Loveless’ righteously cutting stalker tale “Steve Earle,” which possesses the best opening line of any song released all last year: “He read an article that said I like to do cocaine / And now he comes to all my shows and says if I need some he’ll pay.” Consider yourself warned, aging insurgent horndogs. CHARLES AARON

Spaceghostpurrp: It was a wonderful way to start a comedown. As the A$AP Rocky crew took to shaking the Scoot Inn stage during a typically furious stage exit at Thrasher Magazine and Converse’s Death Match party, South Florida-bred hypnagogic rapper/producer (and A$AP collaborator) Spaceghostpurrp and his peoples’ entrance 15 minutes later was defined by a procession-like calm that oozed its way to the set’s seemingly inevitable conclusion: “Suck a Dick for 2011,” the odd anthem in the SPG catalog and a cut (from last year’s Black Radio 66.6 Radio tape) re-dated and re-purposed for the occasion. Though the meat of the vowel-allergic MC’s set was thick with the creepy, crawling, head-clearing night terrors that have found him another listenership among fans (and purveyors of) of indie rock mood pieces, the effect was uniform: We were soothed and sedated, rarely roused. Even the slightly rambunctious men of Main Attrakionz, featured guests on Black Radio’s eight-minute odyssey “Stonergang Raiders,” were content to remain hidden behind waves of entourage, silent and motionless in the background, save for the metronomic nodding of their heads.DAVID BEVAN

Braid: Playing to a packed room at Dirty Dog bar, the pride of Champaign, Illinois, raced through a blistering hour-long set amidst a sea of fist-pumps and buddies slinging arms around each other, tossing favorite lines from ear to ear. The late ’90s emo stalwarts relied heavily on material from 1998’s excellent Frame & Canvas and seeing a bunch of mid-to-late-twenties dudes lose their shit to some Midwest post-hardcore is a sadly goofy thing. But at 1:43 a.m., after four days of hype and buzz bands, it was weirdly comforting. LUKE McCORMICK