‘Awake’ Could Be the Next ‘Lost’

A new NBC drama negotiates two realities, both of them grim 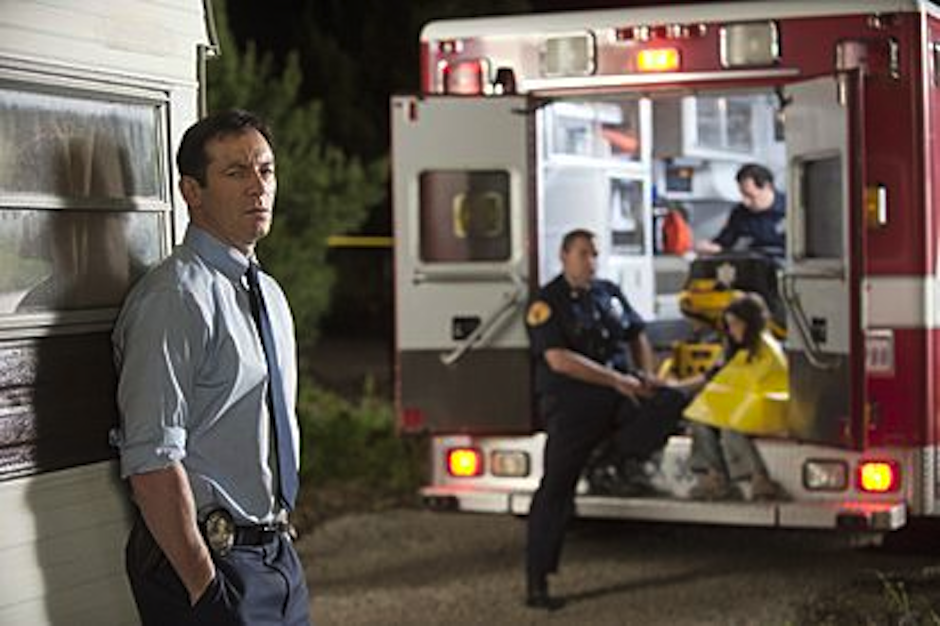 It’s hard to think of a show in recent memory with as much potential in its conceit as Awake, which premieres tonight on NBC. The concept is high, but hypnotic: Detective Michael Britten (Jason Isaacs) returns to work after a brutal car accident that killed either his wife Hannah (Laura Allen) or his son Rex (Lost’s Dylan Minnette). Every time he goes to sleep, he switches between two realities, the one in which his son died and one in which his wife did.

In the first scenario, he is partnered with rookie Efrem Vega (Wilmer Valderrama, the world’s least credible cop). His shrink, Dr. Lee (Law and Order’s B.D. Wong, who apparently just plays shrinks now) urges him to abandon his dream life. His wife tries to process her grief by remodeling the entire house.

In the second, Britten remains with his old partner, Isaiah “Bird” Freeman (Steve Harris). He hustles to solve a crime that has eerie parallels to the one from the other reality. His psychiatrist here is Dr. Evans, played with creepy calm by Cherry Jones. She argues that his connection to this dream life should be cultivated while at the same time insisting that this is real life — how else, she reasons, would Britten be able to read at random from the Constitution? If it were a dream, it would mean he had memorized the entire thing (take that, Lee).

Is Awake science-fiction? Fantasy? A police procedural? A family drama? It seems to be all of them and, in a post-Lost world, audiences are hungry for their next fix of proggy, psychedelic television. Terra Nova is decent, but cluttered. Falling Skies is Walking Dead with the bad guys from District 9. Fringe, another show with two, and then four, competing realities, did a brilliant job for a while there, but never truly took off and now looks perilously close to cancellation. The word I’m looking for is “Phildickian,” as in reminiscent of sci-fi writer Philip K. Dick, who worked the “Dude, what if it was all a dream?” angle better than anyone before or since.

Creator Kyle Killen has actually hit some of these notes before. His incredibly short-lived Lone Star, which was axed after two episodes, concerned another double life, that of a Texan man with a family in Houston and a girlfriend in Midland. But Awake is most reminiscent of the BBC’s excellent, whacked-out Life on Mars, in which a cop (the wonderful John Simm) suffers a car accident and finds himself back in 1973. In that case, the cop really wanted to figure out the whys and hows. The neatest part about Awake is that Britten genuinely doesn’t care. A dumber show would have Britten chomping at the bit to solve the riddle, but as anyone who has experienced significant mourning will agree, God bless those nights when your loved one comes back to you in a dream. A tragedy tends to recast the world as a place where we are trapped by the whims of a misguided or uncaring God, if one exists at all. Britten’s learned the trick of transcendence.

“Trust me, when it comes to letting one of them go, I have no desire to ever make progress,” Britten says at one point. The audience will, of course, feel differently, but Awake will have to hold out for as long as logically possible and I’m curious to see how they’ll keep us interested without showing us which — if either — world is real.