Who Charted? Van Halen and Whitney Houston Return to the Top 10 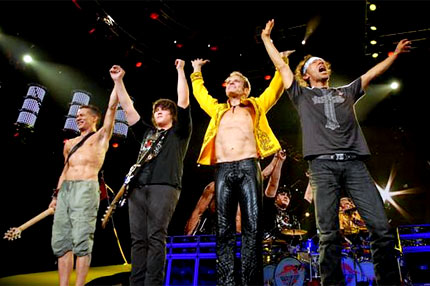 First! Quick, feign Taylor Swift’s look of utter shock. Adele’s 21 is the No. 1 album on Billboard’s Top 200 with a holy-crap 237,000 more copies sold, according to Nielsen SoundScan. There is almost nothing more to say about this other than the following:
• Wow.
• Adele’s album has now spent 20 non-consecutive weeks at No. 1.
• Which is the same number of weeks Whitney Houston’s Bodyguard soundtrack spent there. • Next week will likely be the one 21 spends its 21st turn at the top.

Everyone Will Always Love Whitney: The band fun.’s “We Are Young” (featuring Janelle Monae) made a major move on the Digital Songs chart, leaping from 22 to No. 1 with 296,000 downloads. Kelly Clarkson’s “Stronger (What Doesn’t Kill You)” dipped to No. 2 on that chart, but held on to No. 1 on the Hot 100. Almost 200,000 people downloaded Whitney Houston’s “I Will Always Love You” in the wake of her death, giving her a No. 3 Digital Songs debut.