When Whitney Houston died prematurely over the weekend in a Los Angeles hotel, we didn't just lose a pop singer — we lost a true diva, one of the strongest vocalists of our generation. Take a look back at 15 hits, detours, and other songs that owe her gratitude to grasp the full impact of the Voice. 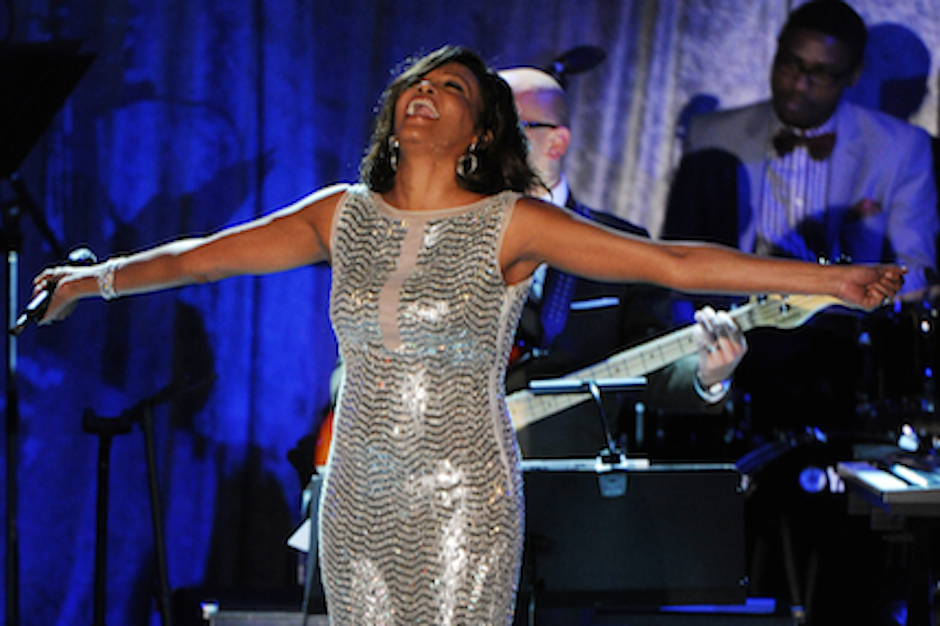 THE FIVE MOST IMPORTANT TRACKS: "Saving All My Love for You" (1985)

Whitney's second single — and first No. 1 pop hit — was a cover of a Marilyn McCoo & Billy Davis song from 1978, produced by its co-writer Michael Masser. For the next five years, its arrangement's combination of dinky keyboard tone and ultra-cheesy sax would be de rigeur for pop-soul ballads. But the secret ingredient was, of course, the singer, whose performance builds from a streamlined simper to a massive, belting tone, and then keeps building in power, effortlessly nailing one glorious high note after another.

In the hours after word of Houston's death was made public, this was the recording that raced across the Internet: her first dance single (which bumped her cousin Dionne Warwick's "That's What Friends Are For" from the top of the charts), stripped down to her magnificent vocal performance. It might be the Houston cut that owes the most to her godmother Aretha Franklin — which could have something to do both with the fact that her mother Cissy Houston, who'd sung with Aretha, harmonizes with Whitney on the background vocals, and with the fact that that producer Narada Michael Walden was called away from working on Aretha's Who's Zoomin' Who album to record this song.

The "How Will I Know" team of writers George Merrill and Shannon Rubicam and producer Narada Michael Walden reunited for the lead single from Houston's second album, Whitney. Whitney's brilliant performance acts out the process of someone psyching herself onto the dance floor and discovering that she's having a great time — for all her vocal acrobatics, the best part may be her spontaneous-sounding flurry of giggles and whoops near the end of the song.

Whitney's remake of Dolly Parton's 1974 torchy country ballad begins with a gambit no other singer aiming for the top of the charts would have dared: at the suggestion of Kevin Costner, her co-star in The Bodyguard, she sings the first verse unaccompanied, drawing out every syllable into a melismatic loop-de-loop. Her performance was the climactic scene of The Bodyguard, and the single shot to the top of the pop charts and stayed there for a then-record 14 weeks.

The sound of dance music had changed dramatically by the time Houston released My Love Is Your Love, her first non-soundtrack album in eight years. She adapted her style to the new groove, though, keeping her performance of this minor-key cheating plaint at a high simmer for its duration. Thunderpuss's Euro-house remix became the hit version — and digitally tweaks Houston's exclamation "you were makin' a fool of me" into an electrifying flourish no human voice could sing.

One of Whitney's first lead vocals on record was this deeply unlikely cover of a 1967 song by English prog-rock band Soft Machine, recorded with New York art-rock ensemble Material and featuring jazz legend Archie Shepp playing slightly dissonant saxophone. It's a remarkable performance for a teenager — nearly everything about her mature style is already in place.

1987's Whitney album closed with this anomaly: it's both a show tune (from Chess) and a duet (with Whitney's mother, gospel-soul veteran Cissy Houston). As a song, it's the kind of broken-hearted ballad that was Whitney's bread and butter--but it's fascinating to hear her voice in the context of her mom's, and notice the particular way the gospel tradition has been passed along to her commanding voice.

Whitney's one real stab at new jack swing was this relatively minor hit from I'm Your Baby Tonight, which puts her in the unusual position of playing a furious, paranoid character, pissed off at a boyfriend who's confused her with his ex. The arrangement constrains her vocal pyrotechnics, so her performance focuses on theatricality instead; in its way, it's a preview of the film career she began a year later.

Fugees' Wyclef Jean and Jerry Duplessis wrote and produced this song for Whitney, more or less in the mode of their cover of "No Woman No Cry." The indelible version of "My Love Is Your Love," though, is Jonathan Peters' club remix, on which Houston's subdued, introverted vocal (by her standards, anyway) slashes across the frantic beats to strangely moving effect.

Houston's final single was a disco-tinged love song written for her by Alicia Keys, one of the many singers she inspired. Her youthful range and agility have been diminished by time, but her artistry hasn't: she rides the song's groove like a horsebreaker, making the most of what remains to her, and spinning every phrase of the lyric with force and precision.

FIVE SONGS THAT COULDN'T EXIST WITHOUT HER: Mariah Carey's "Vision of Love" (1990)

Five years after Whitney's debut album, Mariah's first single appeared — produced by Houston's collaborator Narada Michael Walden, modeled on the sound of hits like "Saving All My Love for You," and spotlighting a performance clearly inspired by her melisma-heavy vocal technique. (The last could be said of a lot of Carey's songs.)

It'd be cruel to compare Christina's infamous performance of "The Star-Spangled Banner" to the masterful Whitney version, so let's not go there. Instead, observe the fleet, ornate flourishes that appear in every extended syllable of Aguilera's vocal here, and consider that their pedigree in uptempo songs like this can be traced directly to "How Will I Know."

At the Grammy Awards the night after Houston's death, it fell to former American Idol contestant Hudson to pay tribute to her with "I Will Always Love You." Hudson's breakthrough recording was this tour de force from the Dreamgirls soundtrack; her interpretation owes as much to Whitney barnstormers like "The Greatest Love of All" as it does to Jennifer Holliday's 1982 hit recording.

Before Whitney, great pop voices mostly got over on tone and interpretation. She changed the game by putting her virtuosity right up front — her death-defying feats of melisma, leaps between registers and technical precision inspired a generation of vocalists. Beyoncé grabbed that baton and ran with it; this torch song is wall-to-wall Houstonisms.

British singer-songwriter Jessie J claims that her recent hit was directly inspired by listening to "I Wanna Dance With Somebody" — which she's also been known to cover onstage. "I [wanted] to write my version of that in this day and age," she told British radio station Capital FM. "It's such a happy song, it makes me smile."