Welcome to CONTROL VOLTAGE, SPIN’s new blog dedicated to electronic music (for dancing and otherwise). Hopefully, you will have figured out the subject from the blog’s title, which is a reference to CV/Gate, an old-school method for controlling analog synthesizers, sequencers, and drum machines. Until MIDI came along in the 1980s, CV/Gate was the primary way for hardware devices to “talk” to each other. These days, the technology is all but extinct, though it does live on in modular synthesizers and boutique gear (like this beautiful specimen). Mostly, I chose the name because I’m a sucker for assonant rhymes; and kind kind of a nerd, as that last point should make extra-clear.

I’ve been writing for SPIN for a while now. My first article, back in 2003, was a roundup of the previous year’s best electronic music, including Boards of Canada’s Geogaddi, Recloose’s Cardiology, Pantytec’s Pony Slaystation, and Metro Area’s self-titled debut album — not a bad list, in retrospect. Some wag on the editorial staff gave it the title, “Electric Candyland,” which turns out to have been weirdly prescient, given that last summer I visited the Electric Daisy Carnival to report “my first cover story for SPIN, a feature on wobble-meister Skrillex and the wub-loving clubbers who have fueled his remarkable rise.

I’ve been reading SPIN for much longer, though. In fact, I started off with issue No. 1, way back in May 1985. I may have bought it for the Madonna cover, whose Like a Virgin I had purchased the previous year, much to my mother’s consternation, when I was 13. But it was the article on “death rock” that pulled me in, inspiring a hunt for kohl-streaked bands like Christian Death and 45 Grave. Elsewhere, in the same issue, I got my first inkling of the world beyond Top 40 radio, thanks to references to Butthole Surfers, Hüsker Dü, and the impeccably named Scraping Foetus Off the Wheel. (Sorry, mom, blame SPIN.) 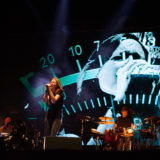 Over the next couple of years, SPIN would supply me with many of the cornerstones of my early adolescence: New Order, Swans, the Jesus and Mary Chain, Cocteau Twins, the Cure, Sonic Youth, Art of Noise, and so on. It may have been the goth and punk sensibilities that grabbed me, but, looking back, many of those bands also gave me my first taste of electronic music, even if it wasn’t explicitly presented as such. (“Blue Monday” FTW.)

There was a time in the ’90s when I didn’t read SPIN, in my punker-than-you phase, in which Maximum RocknRoll was about as “overground” as I deemed acceptable. This was the same era in which I sold off my Korg Poly-800 and Oberheim Matrix 6 for a song, because I had decided that real music was made of nothing more than guitar, bass, drums, and lots of screaming. Shit, I was so purist that I thought the drum machines in freaking Big Black reeked of inauthenticity.

But hey, we all have our phases. Which brings us back to dance music. I’ll spare you the long, drawn-out story of how I learned to stop worrying and love the boom boom boom. Suffice to say, it all began in 1994, with Portishead’s Dummy and Aphex Twin’s Selected Ambient Works Volume II. In ’98, I fell hard for the minimalist techno of Plastikman, Thomas Brinkmann, and labels like Berlin’s Perlon and Cologne’s Profan, the precursor to Kompakt. In the early 2000s, I enjoyed a brief dalliance with U.K. garage and broken beat, which led to an ongoing interest in dubstep and its mutations. In the mid-late aughts, I repped pretty hard for a lot of minimal techno, before the sound completely degenerated into a mess of radio interference and flat-lining bleeps. Like much of the electronic-music world, I’ve spent the last few years listening mostly to various permutations of house music. (The long version of that audio-biography would include second-wave electro, Dutch techno, slow-motion disco, and deeply lysergic ambient, my true love, but we’ll save that for another time.)

Along the way, I’ve written for a slew of publications, from The Wire to Pitchfork; I’ve put out a few records, and DJ’d a string of joints big and small, from sketchy parties in Ciudad Juarez, Mexico to Berlin’s Panorama Bar. I moved from San Francisco to Barcelona in 2005, in no small part because I was chasing the beats, and these days I’m based in Berlin, which, despite its ongoing gentrification, remains one of the world’s most exciting cities for dance music.

So what can you expect from Control Voltage? I’m still figuring out that myself, but I hope to cover everything from the underground’s darkest recesses to the commercial mainstream’s pyrotechnic glare, across a mixture of news, analysis, and opinion. (As you might guess, from my recent article on the Grammys, I can be pretty opinionated.)

Mostly, I hope we can have some fun together. It’s an exciting time for this music, and not just because American audiences are rediscovering what the rest of the world has known for years. (Obviously, plenty of Americans have as well, but there’s no doubt that electronic dance music is currently enjoying an unusual level of stateside popularity.) Dance-music genres are as fluid and as volatile as they’ve ever been. And while cities like London, Detroit, Amsterdam, and Berlin are rightfully celebrated as dance-music capitals, there really is no center any more. Electronic dance music is happening everywhere, from Lisbon to Johannesburg to Washington, D.C., and every local innovation feeds back into the main current — no voltage converter required.

John Talabot, feat. Pional, “So Will Be Now” (Permanent Vacation)

Graphics, “Mama Grizzlies” (Made To Play)