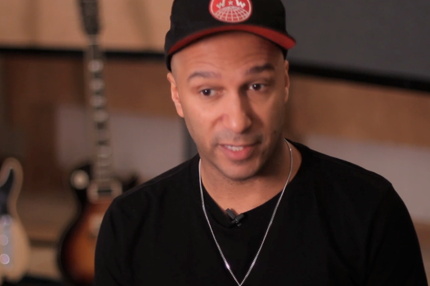 “One thing I’m blessed with is a tremendous sense of self-confidence,” jokes Tom Morello, explaining what gave him the courage to take on Bob Dylan’s “Blind Willie McTell,” for Chimes of Freedom, the just-released Amnesty International USA benefit compilation of Bard cover songs performed by artists like Pete Seeger and Gaslight Anthem. Perhaps you remember Ke$ha’s startlingly minimal rendition of “Don’t Think Twice, It’s All Right”? If you don’t, the entire album is available for listening if you “Like” the album’s Facebook page.

Morello calls his track, which he recorded on the road, “somewhere between Massive Attack and Leonard Cohen.” Another fun fact: He reveals that this is the first record on which he plays left-handed guitar. Why? The reasoning is fuzzy, but he gets there.

“Amnesty International is important for many reasons, one of which is that it stands of for freedom of expression around the globe,” Morello says. “My freedom of expression has been threatened a number of times here in the U.S. where you think it’d be protected by the First Amendment.” He goes on to recall Rage Against the Machine’s tête-à-tête with Clear Channel, when the band’s music was “banned” following 9/11.