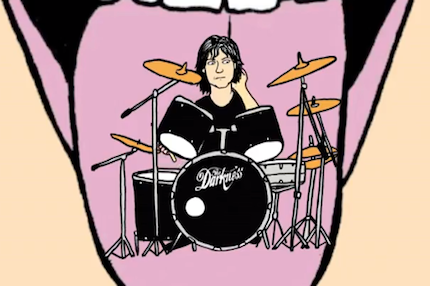 When the going gets tough, artists hoping to capture the moment have a couple of options: feel our pain, or help us pretend that the pain doesn’t exist. For the Darkness, the over-the-top hair-rockers best known for the wonderfully cheesy early 2000s excess of “I Believe in a Thing Called Love,” there wasn’t even a choice. “Nothin’s Gonna Stop Us,” the English band’s first song since 2005’s One Way Ticket to Hell… and Back is all Queen falsetto, Starship exuberance, rainbows, and unicorns.

Its video opens with a BBC reporter declaring, “Everyone everywhere is feeling very sad,” and imagines a time when a tween-age girl would be able to own a record player and a million pieces of band-related merch. Animated hijinks pour forth from her pen, involving flying guitars, flamingos, medieval swordcraft, and a multi-armed boxer playing a guitar solo. “I was pullin’ a wheelie / You’re pullin’ my hair,” yowls Justin Hawkins in the track, which you can download from the band’s website. It all comes back to the hair — but then again, hair is one of the few things we actually have the power to fix.

The Darkness – “All The Pretty Girls”