Music-video counterpart to Clint Eastwood's 'It's Halftime in America' ad 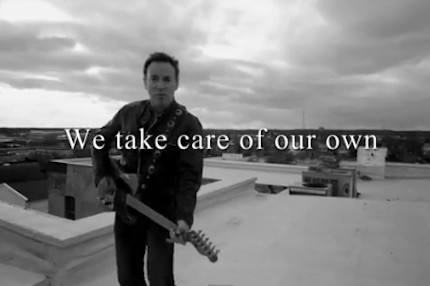 Starting out in monochrome and shifting into full, glorious color is a cinematic trick as old as The Wizard of Oz, but damn if it doesn’t work beautifully sometimes. Fresh off being the newest song on President Barack Obama’s 2012 campaign playlist, Bruce Springsteen’s recession-rocked anthem “We Take Care of Our Own” gets a visual treatment that works like the music-video counterpart to Clint Eastwood’s “It’s Halftime in America” Super Bowl ad.

As the E Street Band’s rousing strains ring out, the Boss rocks earnestly, in silhouette and on rooftops, in between bleak black-and-white footage of everyday people, until, in the second half, the video turns to color, the sun comes out, and folks look confident again. Will you be better off in four years than you were four years ago? Like Eastwood, Springsteen, whose latest album Wrecking Ball arrives on March 6, is evidently betting yes.

A huge part of the clip is again devoted to lyrics. The song’s theme of social responsibility — the idea that true freedom comes through our relationships with each other, not merely rugged individualism — has run in pop culture from Jonathan Franzen’s Freedom to Fleet Foxes’ Helplessness Blues to, well, the president’s own speeches. Most importantly, unlike in a previous “We Take Care of Our Own” lyric clip, “cavalry” is spelled correctly this time, so we can finally get back to sleeping at night. Watch Springsteen and the E Street Band at the Grammys on Sunday — with their newest member.