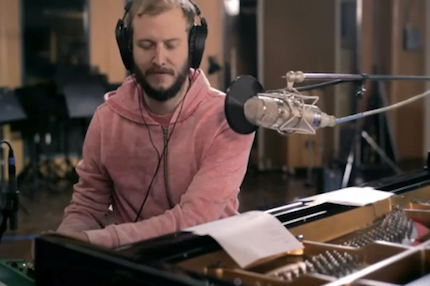 Post-Grammys, Bon Iver are boiling it back down to the essentials. Last night, the band posted video of a nearly 25-minute studio session featuring Justin Vernon and bandmate Sean Carey (who, incidentally, has an impressive solo project) performing five Bon Iver tracks on dueling grand pianos. The set, recorded in London at Associated Independent Recording (or AIR) Studio’s Lyndhurst Hall (according to the studio’s website, it’s one of the largest recording rooms in the world), is a stark retroactive move from Bon Iver, Bon Iver, the album for which the band received Best Alternative Music Album last Sunday. The tracks from that album performed here are given the For Emma, Forever Ago treatment, or even that of Blood Bank, the band’s interim EP. In other words, it reminds listeners that the air of intimacy that sold over 300,000 copies of For Emma isn’t going away, now that Bon Iver has, however reluctantly, nabbed some Grammys (and another 325,000 copies sold — before the awards).

Watch as they perform even more intimate (if it’s possible) renditions of “Hinnom, TX,” “Wash.”, “I Can’t Make You Love Me” (the heartbreaking Bonnie Raitt cover Vernon performed solo for the B-side of Bon Iver’s “Calgary” 7″ becomes a duet now), “Babys,” and “Beth/Rest.” All feature a few upgrades in arrangements or melodies — not like they needed fancy tricks to keep our attention here.

By the way, in case you hadn’t heard (or were still confused as to who the hell we’re talking about), SPIN spent Grammy weekend with Justin Vernon as he navigated his first-ever trip to the awards, and after winning Best New Artist, Vernon gave SPIN an exclusive post-Grammy Q&A.