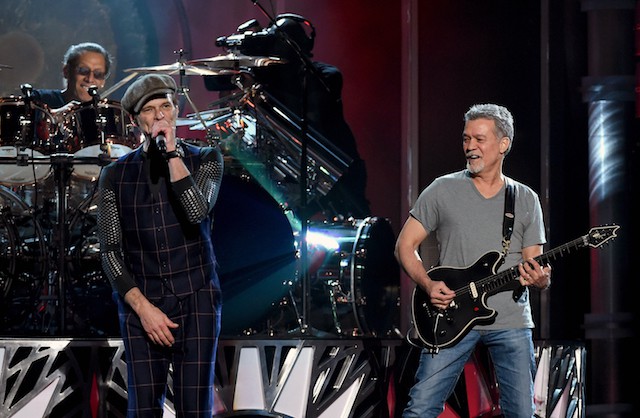 I was 13 in 1984. More to the point, I was 13 during 1984. It’s hard to overstate the impact of Van Halen being the biggest band on the planet at that critical moment of an impressionable suburban adolescent’s cognitive and social development. They were my Beatles: four distinct outsize personalities with skill sets to match, adding up to more than the sum of their considerable parts, a lab-tested calibration of chops, hooks, showmanship, and humor. Their logo was made to be scrawled on the front of an algebra notebook. They became the embodiment of what the term “rock band” even meant, and each band I’ve encountered since has been refracted through that image and attendant mythology, measured against that formula. Fifteen seconds into any song and you knew it was them; my mom knew it was them. When this platonic ideal fantastically imploded a year later, the tragedy of the subsequent lineup (no need to name names) wasn’t that their records were limp (they were) or whether they sold (they did), but that the band was ordinary, and, worse, seemed relieved by that fact, unburdened from the need to be a spectacle, too disengaged to properly navigate the fabled thin line between stupid and clever.

All of which is to say that for 28 (*sigh* doesn’t even begin to cover it) years, I’ve been thinking entirely too much about this moment. Four years after an unlikely and, at least as far as the public is concerned, melodrama-free tour with David Lee Roth, there is now an actual new album, A Different Kind of Truth, that is technically the 12th Van Halen album, but really it’s their seventh. Red flags abound, though: For something that would have been the biggest event in pop at nearly any other point in the past two decades, there’s a weird hush surrounding this release. Could be that the fairly execrable leadoff track and first single, “Tattoo,” lowered expectations. Or maybe Van Halen are now a high-end novelty act, multi-platinum fringe-dwellers who don’t just want to appeal to your easy sense of nostalgia, but don’t really have a peer group they’re striving to outshine. They’ll be playing arenas all year… but with Kool and the Gang opening. The six Van Halen albums between 1977 and 1984 comprise one of rock’s most unassailable hot streaks ̬ how do they make something that doesn’t feel like a wan postscript to that? Better yet: why?

A Different Kind of Truth doesn’t duck either question. It’s not perfect — it’s too long by a third, David Lee Roth often sounds like a 2 A.M. drunk doing David Lee Roth at karaoke, and a Kinks cover wouldn’t have killed them. But the album clearly aspires to both be part of the canon, and, if need be, serve as an entry point. Advance buzz noted that the tracklist was plundering the band’s much-bootlegged 1976 Gene Simmons-produced “Van Halen Zero” demo, as if that spoke to some lack of ambition, but this is actually the mission statement: To redeem the band, and brand, after decades of neglect and bad hoodoo, pitting themselves against their younger, hungrier selves seems far more inspired than lazy. Besides, Van Halen were still dipping back into that well as late as 1984’s “House of Pain,” while Diver Down didn’t suffer any from having just four original non-instrumentals on it.

So skip “Tattoo” — maybe just delete the track from your iTunes as a time-saver — and newly appointed opening track “She’s the Woman,” one of four songs here originally from “Van Halen Zero,” sets the pace: lean and snarling and running circles around the amateurish versions recorded 36 years ago (or 16 years before bassist and genetic-lottery-winner Wolfgang Van Halen’s birth). Ditto “Bullethead” and the album-closing duo “Big River” and “Beats Workin’,” previously known as “Big Trouble” and “Put Out the Lights,” respectively. No synths, no hits, no dubstep experiments. There’s your how.

Even the songs that aren’t directly reworked versions of Paleolithic demos are designed to sound familiar. “Stay Frosty” is damn near undignified in its wink to their debut album’s beloved “Ice Cream Man”; roll your eyes at the idea of men in their mid-50s rehashing their best ideas for fun and/or profit, and many will, or marvel at the fact that it’s 2012 and you’re listening to a new Van Halen song that sounds like “Ice Cream Man.” Bands have been ripping them off for years; they’ve earned their turn. If ever there was an album that demanded we think a little less, this is it. A week after the mass vivisection of Lana Del Rey, that should be the ultimate compliment and ultimate gift.

Best to let go of Diamond Dave — that smirking, leather-chapped, high-kicking slab of testosterone — and accept Roth as hammy, mildly embarrassing Uncle David. He doesn’t attempt any of those trademark dog-whistle shrieks (save for a great one on “As Is” ), nor does he embrace the Heart Attack and Vine-era Tom Waits boze-de-boze-de-bopper we imagined he’d age into; what’s left is a middle ground of amiable, Borscht-Belted come-ons over some ferociously performed music that people used to call heavy metal. If you were banking on more than that out of this record, I don’t know what to tell you. The euphoric “Blood and Fire” (Dave’s purring aside, “Told ya I was coming back!” is this album’s “You’re gonna get some leg tonight fo’ sho’!”).The frantic, haute-for-teacher “As Is” and the mid-tempo shoulda-been-the-single “You and Your Blues” can hang with any heavy-breathing romp they made in their heyday. And if there was still such a thing as AOR radio, these songs would be all over it, spiking convertible rentals all summer long. But there isn’t. So what now?

Anyone looking for chances to wince will find them — “Outta Space” answers the musical question, “What if, instead of Sammy Hagar or Gary Cherone, Fred Schneider?” — but they’re too innocuous to inflict any damage. If you’re gonna gripe about crooned bumper-sticker lyrics like, “When you turn your stereo on / Does it return the favor?,” it’s a real short trip to realizing that a car named after a Central American country is a silly metaphor for fucking, and that trip sounds like no fun at all.

Meanwhile, despite Eddie Van Halen’s various recent physical maladies — he’s probably one-eighth bionic by now — he’s still every bit the freak of nature that launched a million clumsily finger-tapped “Eruption” renditions. The double-time “China Town” is most likely to strike fear in the hearts of the nation’s tablature-writers. And while the absent Michael Anthony is the elephant (not) in the room, this must be said: When it comes to navigating the space between his father’s and uncle’s signature flailings, Wolfie’s combination of nature and nurture comes in pretty handy. Anthony’s trademark background vocals, to say nothing of his just-happy-to-be-here demeanor, are sorely missed, but the kid knows what he’s doing. And Eddie and Alex know what they’re doing placing him there: The band’s publishing is credited to two entities, The Three Twins, LLC and Diamond Dave Enterprises, drawing skewed battle lines, lest anyone consider getting crazy from the heat all over again. (And come to think of it, the few seemingly botched vocal takes left on the record may be how the brothers Van Halen exact their revenge these days.)

But the prospect of soap-opera antics seems unlikely. Toward the end of Van Halen’s surreal warm-up show at a tiny Greenwich Village jazz club last month, a beaming Roth turned to the two brothers who’ve spent the better part of the past three decades as his archenemies and said, “This has to be one of the best gigs ever, right?” Had the microphone been anywhere near his mouth, this would have just sounded like the latest in a long, glorious career of Barnumesque stage blather. But the mic was at his side, and both Alex and Eddie nodded emphatically, more shocked than anyone. Having already proven they can still mint money playing the hits without killing one another, the opportunity to be relevant rather than merely present has to be its own reward. And to do so when their days of dutifully molding teenage consciences by the millions are a distant memory, and when bands half their age show no inclination or ability to pick up the mantle, has to be the closest that faded multimillionaire demigods can get to the feeling they had when they were playing to land a record deal. There’s your why.