There’s a lot more pop in the noise this time 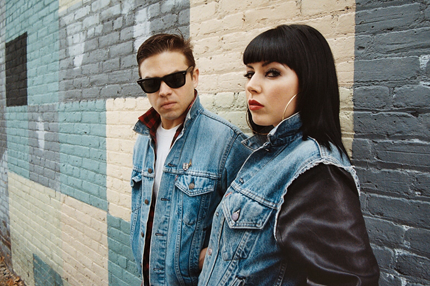 Sleigh Bells’ first album, 2010’s Treats, was a masterful blend of Derek Miller’s skull-crushing guitar, aggressive beat production, and Alexis Krauss’ girlish vocals. As such, people generally, and not unfairly, tagged the Brooklyn duo as “noise-pop.” The upcoming Reign of Terror reverses that description — there’s a lot more pop in the noise this time. The songs fit more closely to hit-song structures, and Krauss’ vocal melodies are brought nicely to the fore. Moshers needn’t worry, though. The album is still loaded with punishing guitar and rhythm tracks that sound like they were inspired by military ballistics exercises.

We had the chance to listen to the entire album in advance of its February 21 release — and today it’s streaming on the New York Times’ site. Here’s what we heard. And don’t forget, Sleigh Bells are on our next cover (and will play this weekend’s Saturday Night Live).

1. “True Shred Guitar”
The opener is a brief prelude, priming the listener for the journey to come with the sound of audience cheering, Miller’s dive-bombing whammy bar guitar salvos, slamming drum-machine bursts, and Krauss repeatedly shouting the title phrase and pump-you-up exhortations like, “I wanna see those fucking hands in the air” and “Push it!” If there’s a Sleigh Bells song destined to play during sporting events, this is it.

2. “Born to Lose”
The album’s first single, this is a mid-tempo track with a staccato power chord guitar riff and a beat that sounds like an M-16 going off. Behind the main guitar part, a second guitar plays eerie harmony lines and Krauss, her voice cleaner and higher in the mix than it ever was on Treats, sings, “You were born to lose.” On the chorus she coos, “Where did you go?” There’s a short guitar solo section that leads back into the chorus, and then the song fades out on a slow, ringing arpeggio.

3. “Crush”
We’re no A&R experts, but “Crush” sounds like a hit. Krauss’ ultra-catchy verse melody is straight-up pop-R&B, skipping and playful. It wouldn’t sound out of place on, say, a Beyoncé record. The chorus is just as sticky, as Krauss sings, “Oh oh / I gotta crush on you.” The music is still tough, though, as Miller pounds out a huge Def Leppard-style guitar riff, giddy little counter-melody lines, and lets loose with some more whammy bar wriggles. Crowd-cheering sounds are tucked into the mix on this one too.

4. “End of the Line”
The album’s big ballad. Krauss gently sings, “It didn’t have to be this way” over a gauzy, chiming guitar playing and booming kick drum. Another of Miller’s nicely sighing six-string counter-melodies curls around Krauss’ voice. Her vocal is layered into harmony parts as she sings, “No one hears you / Up above you.” This is prime prom slow-dance material.

5. “Leader of the Pack”
Definitely not a cover of the Shangri-La’s girl-group classic, this short track opens on what sounds like a twinkling keyboard that’s quickly engulfed by massive distorted guitar stabs. Krauss sings about losing someone (“Nothing matters much”; “Don’t you know / he’s never come come back.”). The song meanders to a close on a dual-guitar breakdown.

6. “Comeback Kid”
Over a guitar riff that sounds like a bastard-version of Queen’s “We Will Rock You,” Krauss sings one of the album’s catchiest melodies. As with “Crush,” the vocal line is heavily R&B influenced, moving from middle-register sing-song to an awesome upper-range hook. The backing beat is the punishing counterpart to the poppy vocals, built as it is on a chest-rattling kick drum and constantly crashing cymbal. Songs like this one suggest that Reign of Terror is, generally, a more accessible album than its punishing predecessor.

7. “Demons”
The album’s most evil, purely metal guitar part battles for attention with Krauss, who sounds on this one like the possessed kid from The Exorcist. “You’ll be taken down,” she growls, “brick by brick.” In between verses, Miller plays groaning unison bends on the guitar. If there was one track on Reign of Terror that you’d would want to have playing while you were smashing a pool cue across someone’s back in a bar brawl, it’d be “Demons.”

8. “Road to Hell”
The music behind on the vocals on this mid-tempo number registers more like a series of explosions than as notes. There’s the blasting of what could be machine guns, a curvy guitar lick, chunky palm-muted chords, and the beat sounds like something detonating. The icing on this pop-noise landmine is another adorable Krauss vocal, who chastely sings, “Don’t run away from me baby / Just go away from me baby.” Sleigh Bells’ gift for marrying aggressive backing sounds to seductive vocal melody is beautifully displayed here.

9. “You Lost Me”
If “Crush” was the band’s version of an up-tempo Def Leppard-influenced pop confection, “You Lost Me” is their attempt at something like that band’s “Hysteria.” It’s full of swooning, glistening guitar arpeggios and perfectly placed power chords. Krauss drops another gorgeous vocal here, singing, “I don’t want you to see me this way” in an angelic middle-register. (She shows off a lot more range and subtlety on this album then she did on the debut.) “You Lost Me” is maybe the album’s most purely beautiful song, with lyrics like “You’re holding hands / to your favorite bands” conjuring an atmosphere of dreamy innocence. Of course, this being Sleigh Bells, the track ends on a brief burst of echoed guitar.

10. “Never Say Die”
The penultimate track is an uneasy mix of silvery, spidery guitar lines and ghostly, disembodied vocal melody — the nightmare counterpart to the dream of “You Lost Me.” Krauss does a lot of wordless oohing and aahing on this one, which also features funereal bell-like sounds ricocheting around the mix. Mostly, it’s dominating by those spine-tingling guitar parts. Creepy.

11. “D.O.A.”
Ominous. Brief closer “D.O.A.” could almost be an excerpt to some longer, tortured Norwegian black metal song. The guitar here, so full and arena-rattling elsewhere on the album, sounds sickly and dry. Again, as with “Never Say Die,” Krauss’ performance here is spooky, as if her spirit’s been broken. The vocal is mostly wordless, though you can make out the line, “How come nobody knows?” The track is a supremely unsettling ending to an album that for most of its running-length deftly balances darkness and light.