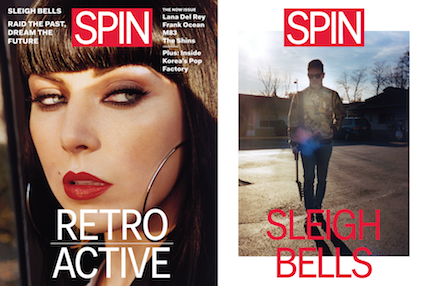 The word is out: Sleigh Bells are on the next cover of SPIN! Oh, and they’re playing Saturday Night Live, too. First, the SNL details: Alexis Krauss and Derek Miller will appear on the Maya Rudolph-hosted February 18 show, performing two songs from February 21’s Reign of Terror, “Comeback Kid” and “End of the Line.” If they’re lucky, they’ll get to appear in a sketch where the Bridesmaids star is doing her killer Donatella Versace impression. Unfortunately, that means folks planning to attend their Toronto and Washington, D.C. shows on the 16th and 18th are a little out of luck (they’ve been rescheduled for March 26 and 27, respectively).

Now the important stuff: Sleigh Bells will appear on the cover of SPIN’s first freshly designed March/April issue, on newsstands February 28. David Marchese goes behind the scenes during the making of Reign of Terror, and finds that even a record this fun has some dark secrets behind it.

We’ll have more Sleigh Bells goodies here on SPIN.com in the coming days. In the meantime, we have fantastic — and, we should mention, exclusive! — photos of the band as they launched their Paradise Lost tour in Florida over the weekend, as well as some first listens to new music and an in the studio interview: