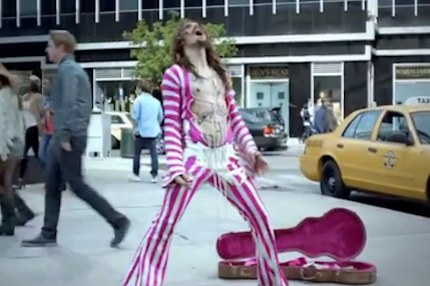 1. Madonna’s Halftime Show
Whether you loved it or hated it, Madge’s extravaganza — complete with M.I.A.’s flip-off — was pure entertainment spectacle.

2. Kelly Clarkson Singing the National Anthem
She nailed it. Beautiful.

4. Echo & the Bunnymen, Vampires, and Audi
This ad was awesomely weird. Set to Echo & the Bunnymen’s goth-rock classic “The Killing Moon,” this spot seems to suggest that Audi is now making headlights a selling point — because they’re so bright they can kill partying vampires!

5. OK GO Go Nuts for Chevrolet Sonic
The masters of the ingenious viral music video lend their talents to a daredevil Chevy ad.

8. The Kia Optima Is For Men!
A scantily clad supermodel, rodeo riders, MMA fighting, lots of fire — one couldn’t accuse Kia of opting for subtlety here. Which is why Mötley Crüe made for perfect musical accompaniment.

9. Bud Light Platinum Goes “Runaway”
The weirdest thing about Bud’s use of Kanye West’s “Runaway” was that they only aired the eerie piano plinking at the beginning of the song — Ye’s voice is never heard.

10. Clint Eastwood Replaces Eminem For Chrysler
During last year’s Super Bowl, hometown boy Eminem repped for Detroit’s proud legacy (courtesy of Chrysler). This year, the honor went to Clint Eastwood, who played someone from Detroit in Gran Torino. Weird too that the ad was about “halftime in America.” Does that mean we’re only lasting another 200 odd years? Either way, stirring classical music gets me every time!