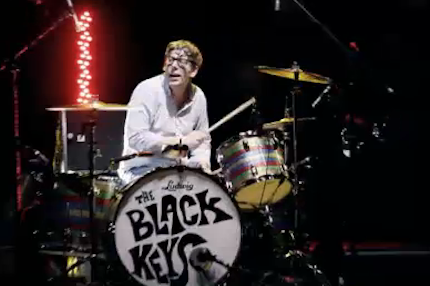 The Black Keys’ latest video shows how the Ohio rockers have grown and changed, but also how they haven’t. “Gold on the Ceiling,” a punchy, swag-friendly rave-up from last year’s glitz-meets-grit El Camino, is one of the best indications of how guitarist Dan Auerbach and drummer Patrick Carney have evolved from R&B-tinged garage-rock to glammed-out T. Rex boogies without missing a domineering step. The video, which premiered last night on MTV, shows El Camino’s trademark not-actually-an-El-Camino van, but otherwise largely shrugs off the overt viral potential of, say, previous single “Lonely Boy” and its Carlton-destroying dancing dude.

Instead, the “Gold on the Ceiling” video follows the Black Keys as they play live, including footage from their El Camino release show at New York’s Webster Hall — the one we photographed here!. The guys tell MTV’s interviewer they picked a live video this time around because it’s “cheap and awesome,” and while the clip doesn’t look cheap — so many different angles, from so many different shows around the world! — if you give in to the Keys’ hook-packed glam-pop, you certainly might find yourself responding like the concertgoers in the video to its fully evident awesomeness. You might also want to go vintage clothes shopping with the dudes.

Did we say there was no viral potential? MTV’s interview clips go on to include the Black Keys’ comments on Tumblr time-waster topic du jour Lana Del Rey, of whose rapid ascent to Saturday Night Live status the Key’s Carney says, “It’s different for everybody.” He adds: “I feel bad for a lot of bands who are starting out with the way things are now, just with blogs and everything … The trends flip over so fast and something’s cool and not cool and it all happens within like two or three months.” Of music critics who ignore the Black Keys: “[It’s] ’cause they’re pricks!”

Pricks take note: a collaboration between the Black Keys and their Twitter pal Ke$ha is not out of the question! “We’re friends with her,” Carney tells MTV of the singer-rapper, who recently teamed up with the Flaming Lips. “We’ve known her since way before she was famous.” Then the Black Keys must know Ke$ha probably would’ve wanted their “Gold on the Ceiling” video to include a little more, well, gold — or at least glitter — on the ceiling, right?