We hope it really does mean nothing 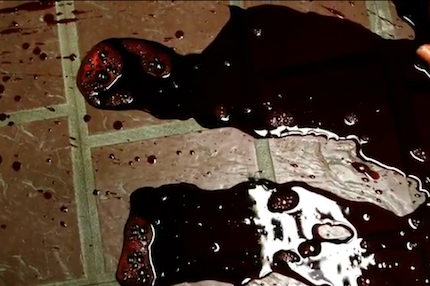 Screaming Females have always struck us as cat people. Yesterday, though, the trio dropped quite the video for "It All Means Nothing," the first single off their forthcoming Albini-produced album Ugly, and now, we’re having second thoughts — second, very dark thoughts.

The clip, directed by Ken Castellano and probably filmed in one of the trio’s houses in Jersey, begins innocently enough, Jarrett and Mike (drummer and bassist, respectively) having a casual chat, petting their three cats occasionally as the felines roam the apartment, eating the plants and doing similarly passive aggressive cat things. Everything is fluffy and happy and cute, as is the custom in cat videos. However, about a minute into the clip, frontwoman Marissa Paternoster comes home, and the shit hits the fan, in the worst way. Blood, blood, entrails, cookbooks, and more blood populate the latter three quarters of the video, which, we’re sad to say (and almost spoil), ends in a body in a bag floating down a near-frozen river. Just goes to show you that good times with cats will always inevitably end in murder.

See Screaming Females hard at work in the studio with Steve Albini.