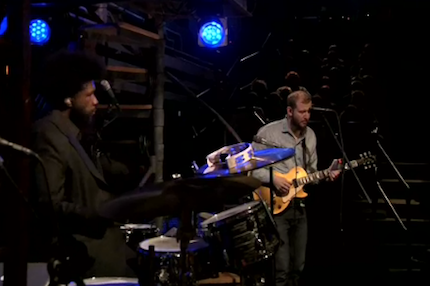 Rumor had it Bon Iver did a little jamming with late-night’s coolest house band when he was in New York recently, and now the evidence has finally arrived as a web-only clip from Late Night With Jimmy Fallon. Justin Vernon and the Roots’ ?uestlove, longtime Twitter pals, are totally vibing on this funkified remix of "Perth," the first track on the four-times-Grammy-nominated Bon Iver, Bon Iver. Watch the video and see if you, too, believe in a wondrous, mystical, smooth-funk-jam future where Roots Iver is a real thing.

And if you haven’t already, check out our recent SPIN cover story on Bon Iver. He’s nominated for Grammys!