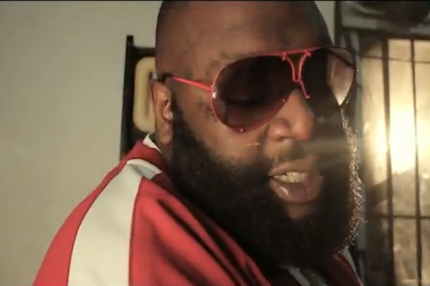 Rick Ross doesn’t deal in subtleties. Over the last couple of albums, 2009’s Deeper Than Rap and 2010’s especially triumphant Teflon Don, the Miami rapper has made everyone forget about his prison-guard perfect attendance record by mastering the role of the gruff, villainous drug lord. He makes illicit wealth sound not only luxurious — as his Maybach Music label’s Mercedes-referencing moniker underscores — but fun. He effectively rendered fellow drug-trade hip-hop motivational grunter Young Jeezy irrelevant.

Ross’s latest mixtape, the diabolical Rich Forever, at first might appear to be more of the same. Excess is all over the 20-track, hour-plus mixtape, from the high-profile guests (Diddy, Drake, Nas, Kelly Rowland, Pharrell, John Legend) and Ross’s in-house producers (Beat Billionaire, Justice League, the Inkredibles — only one Lex Luger joint!) to, of course, the lyrical content. The Bawse doesn’t just talk about his wealth, he compares it to that of music’s other Boss. He doesn’t just describe his gun, he tells us his urine is on it. Rozay: “It’s time to take you to the other side / The side you gotta watch A&E cable television for, homey.” His ridiculousness has become only more intricate, evolving beyond Jeezy’s street-cred rawness to something, well, deeper.

Rich Forever also comes after a year when Ross suffered seizures, in a rare and highly public instance of vulnerability for the infamously unflappable MC. It’s no stretch to find traces of Ross’s brush with mortality on this album-quality mixtape, though they’re admittedly — what’s this? — kind of subtle. “I am flawed, it may not seem that way, but I am,” Ross acknowledges only one track in, on the Mike Tyson-sampling “High Definition,” and he’s not just using clever imagery when he compares his necklace to a guillotine. “I’m balling till my very last breath,” Ross intones on a paranoid banger called “Last Breath.” Get rich, and die trying to keep jealous haters from dipping into your wealth.

Unfortunately, you won’t get any of that from “Yella Diamonds,” the mixtape’s current video selection. The visuals feature lousy acting, lame subtitles, and gratuitous man-on-woman violence as Ross and his hammy co-stars act out a drug-dealer revenge drama. Ross says at the end of Rich Forever he wants the mixtape to be like a Brian De Palma movie, so if he’s evil here, it’s just another example of Ross playing the part of a vicious drug dealer rather than actually being one. But that doesn’t make watching Ross enact the song’s “home invasion” any more enjoyable or illuminating.

Ross has gained fame as a sort of hip-hop action hero. In this video, he isn’t a particularly good one. It could be because, as the Bawse prepares his next album God Forgives, I Don’t, he’s growing into something a bit more three-dimensional. Snort all you want.