Diggin’ in the Crates for Untold Treasures From Mantronix, Underworld, and More

Funky machinery, glorious glitchery, indie before it was indie, and the rave era's mystical arena-rock moment 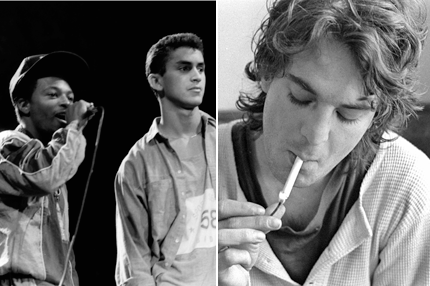 Kurtis Mantronik’s productions represent a time in the mid-1980s when rap still meant synthesizers and drum machines. Instead of the comforting, continuous sound of funk breaks and vinyl static, listeners heard the mean punctuation of silence; instead of grainy horns and soul choirs, they heard the burble of the 808’s tom-tom and the brash syncopation of digital bells. By the late-’80s and early-’90s, this was all deeply out of fashion. In the rearview, though, Mantronik was a visionary — one of those artists whose sound feels common and unremarkable, until you realize he invented it. Compared to the beats on Mantronix records, the rapping (mostly by MC Tee) was quaint and nervous. It’s there to move the party. It’s there to rock your body. Ultimately, though, the MC in this music is a servant to a far stronger force. Naturalists and technophobes may be eternally skeptical of taking party directives from a robot, but they’re missing the point: Funk knows not the difference between hands of metal and hands of flesh, only whether the clap is in the groove.

Glitch is a genre that conjures images of severe European men brooding over what, to virgin ears, sounds like a CD skipping. What makes Markus Popp’s records stand out is that they’re as motivated by musical concerns as technological ones. Between the Tourettic clicks, skitters, and hiccups are the sounds of rhythmic and melodic lines being endlessly fractured and held up; think of it as Cubism in sound. Popp’s gift is that on his best tracks, no real distinction can be made between the sonic and the musical — one becomes a vehicle for the other. The first disc here is essentially odds and ends, but plays remarkably well as a kind of variety pack for the uninitiated, in part because the tracks are so short — 25 in an hour. The second disc is an open-source, make-your-own-Oval-album kit, a DVD filled with 2,000 samples assembled by Popp over the years.

Kent is a storied Scottish DJ and archivist who has been assembling compilations of obscure disco for about a decade. Think, then, of this collection as a primer to his alternative history. Calling it a “best-of” when it’s five hours long is absurd, indulgent, and straight naughty, but then again, disco seems like it was designed to both excite and exhaust listeners. The music itself is still a weirdly fascinating mix of primitive urges and sophisticated arrangements, as though nobody could tell you’re thrusting away like a chimp under all those violins. It’s costly time-wise, but mercifully, the label has priced it on the cheap side.

Since 1966 marks the fifth time the folksinger Karen Dalton has been compiled or reissued in the past five years, skepticism is warranted — can any artist who went virtually unknown in her lifetime really have five full discs worth of great material? The bullet points of Dalton’s life — odd voice, drug habit, no fixed address, and a brief mention in Dylan’s autobiography — are so well-suited to mythmaking it almost seems like she might’ve been invented retroactively. Surprisingly, then, most of the reissues have been pretty good, and this one — informally recorded with some banjo and guitar in a Colorado cabin — is among the best. Dalton sings in a flat twang with bright, waxy vowels — Billie Holiday, sure, but where Holiday sounds horny and existential, Dalton, who was about 30 at the time of recording, sounds like a grandma: familiar, strange, and fragile.

The Original Sound of Cumbia

Cumbia was developed in Colombia as courtship music for poor people and slaves, a history heard in the rough informality of the sound. Arrangements vary some, but not radically: the fanciest tracks here have a daub of reverb and real horn sections, while the rest approximate their orchestras with busted-up accordions. The glue of the rhythm is in the güira, which sounds like a ratchet wedging itself rudely between the shakers and hand drums. Permutations can be found as far north as Mexico and south as Argentina, where in the past ten years or so, younger musicians have added more rhythmic kinks and traded accordions for the nasty, playful sound of the keytar. What’s here, though, is the pure stuff, extracted from old 45s, 78s, and LPs, brash and simple, part Africa, part polka.

A skinny white guy from Memphis, Tenn., Chilton was born into the commercially driven world of R&B but captivated by the British invasion — manners and vague emotions on one side, rawness and humor on the other. In exploring the gap between, he risked becoming a nobody. Instead, he became a somebody of his own invention. Arguably most famous for fronting Big Star — a band that played with an insular, skewed indie attitude before an indie attitude existed — he pioneered power-pop. Before that, he was in the Box Tops, a white soul band whose No. 1 pop hit, “The Letter,” still gets airplay on whatever’s left of oldies radio. These sessions, previously released under the title 1970, came between those two career phases, but don’t serve as much of a bridge. In actuality, Free Again fits more with the inscrutable, jagged solo albums that Chilton released after Big Star broke up. In his strange, internal logic, Sunday-morning piano ballads like “The EMI Song” (incredibly subtitled “Smile For Me”) could somehow stand upright next to a nasty satire called “All I Really Want Is Money,” which Chilton barks hoarsely like an ancient bluesman.

Like 1980s rap, golden-age Trinidadian calypso is the sound of current events masquerading as dance music. Mighty Sparrow is an entertainer first and foremost, but he’s also a town-square sociologist: When he sings about local women whoring themselves to Yankee occupiers, for example, it’s as much to express the heartache of watching the imperialists have their way as it is for the sex joke. Unfortunately, you get very little of that from listening to Sparromania! because Sparrow’s best songs aren’t on it. Instead, it’s a hash of second-stringers and novelties, all noisily mastered. You can see why he might be suspicious of outsiders after all.

Though they didn’t cultivate rock audiences as cleverly as the Chemical Brothers, Underworld were one of the first groups to make techno work on a stadium scale. Whether you see this as a crime or an innovation probably depends less on how you feel about Skrillex or the influence of machinery on art and more how you feel about stuff like Pink Floyd or Genesis — bands that, like Underworld, make mystical, atmospheric music for the masses. Does it bang? It bangs mightily and free of pain. Time has made Underworld’s first-stringers — particularly “Born Slippy” — both more embarrassing and more unfuckwithable. The second-stringers are fine, but the group has been in creative decline since the late 1990s, which 1992-2012 demonstrates in its roughly chronological sequencing. The anthology covers more or less the same material as the out-of-print 1992-2002 with a third disc of rarities; A Collection is a single-disc best-of, with track lengths chopped down to three or four minutes. Given the choice, you may as well surrender to the grandiose originals.