The OFWGKTA punks stick their feet in each other's mouths 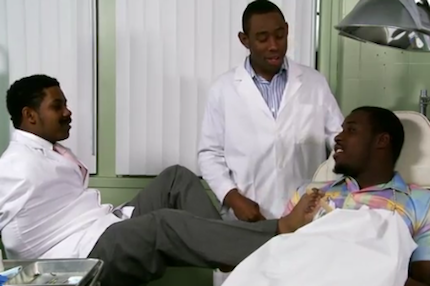 The two clips, which clock in at under a minute when combined, showcase… well, exactly what we expected from the show: the Odd Future guys being huge weirdos, swearing so much we can’t understand what they’re saying through all the “BEEEEEEP”s, and sticking their feet in each other’s mouths. It’s typical Generation Y humor, though; the 18 seconds we see of the “#Hashtag Court” sketch makes it clear that Loiter Squad is going to be full of jokes about Twitter and such that people over the age of 40 probably won’t get — or want to see at all, for that matter. Nevertheless, 37 seconds of “Armless Dentist” shows us the core of what this show is probably going to be: a whole lot of us staring at the Odd Future guys dicking around, going off-script, and just hanging out on-camera with some fancy props: it’s what Jackass! would be if it starred nihilist teenagers living by the “Kill people! Burn shit! Fuck school!” mantra (so, basically, your average punk-ass neighborhood kids recreating Johnny Knoxville and Bam Margera’s stunts in their backyard, plus a lot of Cartoon Network money).

Loiter Squad premieres March 25 on Cartoon Network’s late-night Adult Swim, five days after the OFWGKTA gang’s new group album OF Tape Vol. 2 (the follow-up to their 2008 mixtape) drops (March 20), and two weeks after they hit the road promoting the album. Read about SPIN’s time on the road with Odd Future here.