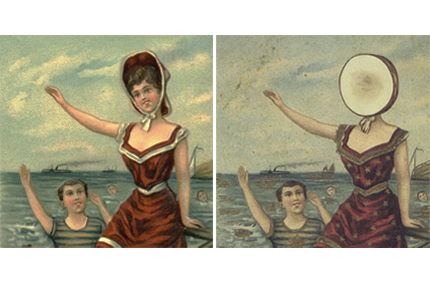 It’s been a historic year for Neutral Milk Hotel fans as Jeff Mangum transformed from a genius recluse to a real-life touring act after a 12-year musical dormancy. Now, as Mangum preps for his Chicago concert tonight, an essential piece of Elephant 6 yore has emerged: The original postcard that was altered by artist Chris Bilheimer to create the cover of 1998’s In the Aeroplane Over the Sea. As the story goes, Mangum was in possession of the early 20th century postcard featuring beach resort revelers and asked Bilheimer to replace the “bathing beauty” with the drum-faced/potato-faced girl (the object is still under debate) forever immortalized on the Aeroplane cover.

According to 4chan’s /mu/ board, an antique store in Lambertville, New Jersey, was probably unaware they were selling such a storied indie rock item until a throng of Mangum acolytes descended on the boutique today. The postcard was first photographed on February 4 by a Tumblr user and then made its way to the /mu/ crew. Check out this rundown for the full summary of “Potatogate 2012″ as it stands now.

The postcard currently (or probably sold by now) in the Garden State antique shop is actually the second “bathing beauty” the Internet has unearthed in recent months. A site called Cardcow that specializes in vintage postcards recently sold another iteration of the “bathing beauty” postcard that was sent from Whitehall, Montana to Idaho in 1908. The manufacturing info on the postcard itself suggests that it originated in Eastern Europe or Russia.

However, there are some subtle differences — other than the drum face — between this “bathing beauty” and the one on the Aeroplane cover: The girl’s swimsuit and the waving boy in the background’s striped shirt are both missing the stars found on the Jersey/Aeroplane version of the postcard, leading some 4channers to speculate that the postcard’s artwork was modified and then reprinted at least once. In fact, the original Aeroplane portrait was initially featured in a whole series of “bathing beauty” postcards.

While it’s impossibly unlikely that this discovered postcard is the same one previously owned by Mangum, it’s still an awesome, century-old piece of NMH ephemera. It’s almost like possessing the $1 bill found on the cover of Nevermind: San Francisco Treasury Seal, serial number 94998746B.