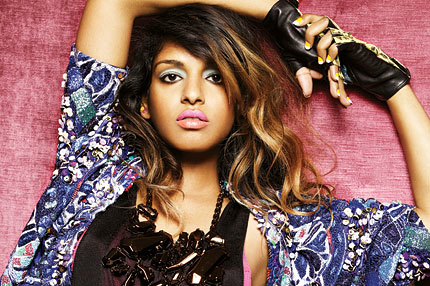 Finally, a reason to talk about M.I.A.’s middle finger, which harmed nearly nobody during a Super Bowl broadcast awash in patriarchal pomp. Actually, there are now about 550,000 reasons, which is the amount of money that CBS almost had to pay for Janet Jackson’s 2004 halftime-show “wardrobe malfunction.” That’s because, according to TMZ, M.I.A. will have to pay if NBC gets fined for her silly hand gesture during Sunday night’s game.

The Federal Communications Commission’s indecency rules allow broadcasters to be fined for airing supposedly objectionable words or images, even if it’s only by accident. A federal appeals court eventually tossed out a $550,000 fine against CBS over the Jackson incident, and the Supreme Court is actually reviewing these rules. In the case of this year’s Super Bowl, TMZ’s sources say the NFL took responsibility for the content, covering NBC for its legal obligations. But there was a catch: The NFL reportedly made sure the contract M.I.A. signed forces her to foot the bill for any potential FCC fines.

It isn’t clear whether Madonna’s contract includes a similar indemnity clause. TMZ’s sources say the NFL wanted to tell performers, in effect, that the pro football league is not to be fucked with. Then again, how can you put a price on 152 million people maybe associating your name with being vaguely provocative? Maybe still not as provocative as that old clown Jim Morrison when he (allegedly) pulled out his lizard onstage in the ’60s or anything — or, like, that Soy Bomb guy at the Grammys that one year — but hey, Morrison’s dead, the Soy Bomb guy was just some performance artist, and besides, there’s quality new product to hawk. Read SPIN’s August 2010 primer on Maya Arulpragasm, titled “Deconstructing M.I.A.,” here.