Mama Madge is not pleased with Maya's attitude, young lady 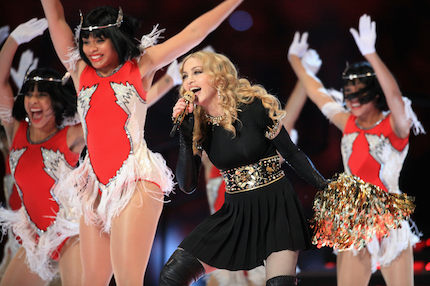 In an interview with Ryan Seacrest this morning, Madonna admitted that she was so not happy with M.I.A. over that whole bird-flipping debacle at the Super Bowl. In her words, she thought the gesture was a "very teenager, irrelevant thing to do," per Spinner. And she didn’t even know about the guest appearance from M.I.A.’s middle finger until she was in the elevator leaving the game.

The world presumed the original bad girl wasn’t so thrilled with M.I.A.’s cute little PR stunt, especially given that the rest of Madge’s performance was basically G-rated (and awesome). “I was really surprised. I didn’t know anything about it,” Madonna said. “I wasn’t happy about it. I understand it’s kind of punk rock and everything, but to me there was such a feeling of love and good energy, and positivity, it seemed negative. … there was such a feeling of love and unity there, what was the point? It was just out of place.”

Madonna had nice things to say about LMFAO and Cee Lo, calling them “fun people.” (Nicki and M.I.A. are “cool… have youthful energy and are badasses in their own right”). So Madonna is praising LMFAO and criticizing M.I.A. Got it. But does Madonna find M.I.A. as objectionable as full-figured flowers?

Considering M.I.A.’s still potentially facing a fat fee for the finger from NBC and the NFL, we hope the Queen of Pop shows a little mercy on her collaborator, unlike the entire hydrangea population. After all, Maya did don a cheerleading skirt and shake pom-poms for the legend promptly following the release of her badass video for "Bad Girls.". Plus, according to TMZ, Madonna told Carson Daly M.I.A. called to apologize, which is more than the hydrangeas did for offending her.