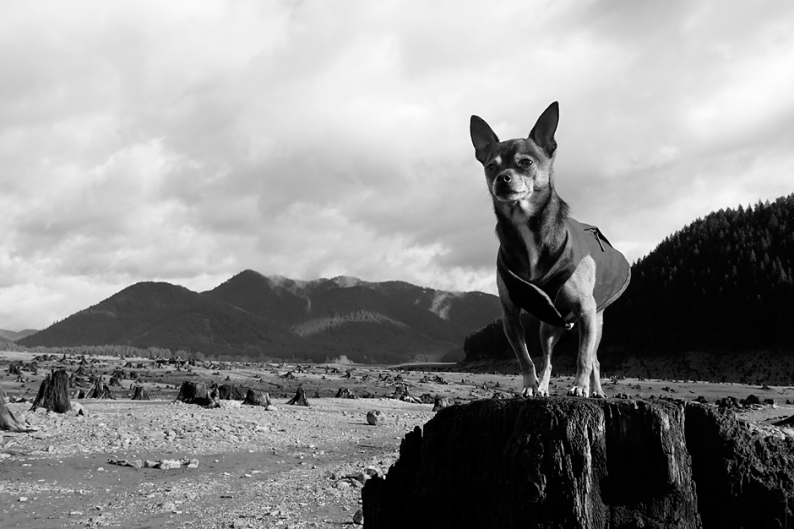 Daniel Menche: My ex-girlfriend’s son bought me this little tiny fur ball. He’s four years old now. I had him when he was a tiny little biscuit; I could hold him in my palm. Arrow is magical: If someone is in a rut creatively, you just hold him and make your music. When I record my music, Arrow’s on my lap. He’s made a few appearances on my recordings where I’ve time-stretched his screaming and barking, which is a really beautiful thing to hear.

Making my music is something very natural to me, but artwork is always very difficult. With this Guts album, everything came together [because of Arrow]. About three years ago, he was a little puppy and I was doing landscaping work. Arrow got attacked by a gigantic Labrador near the house I was working at. I actually had to run and grab the Labrador and open up his jaws like Samson and the lion. This poor little Chihuahua, he was really tiny at the time, he was just screaming. His screams ripped my eardrums they were so loud and terrifying. We took him to the vet and got X-rays done. He was okay, some internal injuries, but fine. They gave me these JPEGs of the X-rays, and from the get-go I was like, “This is gonna make an album cover.” But it has to be an LP, ’cause then it’ll be life-sized. Originally, I was gonna call the album Piano Guts, but then it’s like, “Oh, Arrow’s X-rays!”

I do some vocals on one of the tracks on the last SunnO))) album, Monoliths & Dimensions? Stephen O’Malley and a whole bunch of other people formed this thing called the “Man Choir.” It was all burly dudes, all afternoon, passing this Chihuahua around. When we were doing the vocal, there’s incriminating photos of us around a microphone going, “ARRGGGGGHHHH!” and then Arrow’s there. Everyone’s passing Arrow around like this goblet. Everyone who did vocals had to hold this tiny puppy. You hear the music and it sounds like some serious heavy shit, but if you saw the photos, it’s like, “What are these idiots doing, growling around a microphone with a Chihuahua?”