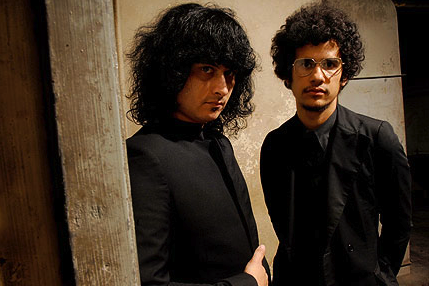 The Mars Volta’s sixth album, Noctourniquet, comes out on March 27 with a storyline evidently drawn from Greek myth, Superman comics, and obscure British rockists. First single “The Malkin Jewel,” which premiered today on Australia’s Triple J Radio (via Antiquiet), is about as bewildering as that all suggests.

Already a part of the Mars Volta’s live arsenal, “The Malkin Jewel” continues the band’s propensity for music that displays astonishing technical complexity, but the surprise this time is a gutter-blues swagger that brings to mind Nick Cave’s Grinderman. Don’t expect anything as immediately communicative as Grinderman’s “No Pussy Blues,” though. Rather, the initial garage-rock lurch and tough-to-discern whispers about rats and vermin give way to a tedious herky-jerk bridge (pretty sure one of the lyrics involves a “bivouac” — Colin Meloy? Kevin Barnes? Is that you in there?). Everybody can play the hell out of what they’re playing, but it’s hard to tell how much they might be just playing with themselves.

The song ends in mid-breath, so maybe the next track on the album will help make sense of everything. Let’s see, what’s that one called? Oh, the title is in Russian? Right.