Kurt Cobain Would Have Turned 45 Today 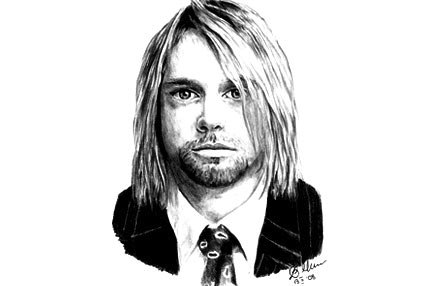 Dave Matthews, Billy Corgan, Noel Gallagher, and Scott Weiland will all turn 45 this year. Kurt Cobain would have joined them today had he not sadly joined a more morbid club on April 5, 1994.

SPIN has done a lot of Cobain appreciating in our time, but last summer we went all out celebrating the 20th anniversary of Nirvana’s landmark 1991 album Nevermind. Why? Because at that point, the word “Nirvana” had appeared in our pages 1,484 times since its release. Because as Eddie Vedder told us of his first listen to the LP, “Just hearing that tape with the white label, it had an impact. It felt like a change.”

What would have happened if Cobain did live past his 27th birthday? Chuck Klosterman tackled the idea, dreaming up a future for Kurt that lasted until 2003. But today, we’d like you to reflect once again on the massive impact this one man had on our lives, our culture, our ears, and our hearts:

• Kurt Cobain Scrapbook: Images of Kurt through the years, as we ran them in the pages of SPIN.

Plus: Watch Nirvana’s performance of “School” at 1992’s Reading Festival. No recess. We miss you, Kurt.