Since 1992, when she famously ripped up a photograph of the pope on Saturday Night Live, Sinéad O’Connor has been better at getting press for her perplexing antics than for her music. There was the 1999 decision to become ordained as a priest, her 2000 announcement — and subsequent disavowal — that she was a lesbian, and her 2007 revelation that she was bipolar (which she later said was a misdiagnosis). O’Connor’s career-long roller coaster took an even dizzier turn recently, as she transformed her official website into a clearinghouse for raunchy blog posts about anal sex and her search for a courageous suitor. The latter culminated in an on-again, off-again marriage to substance abuse counselor Barry Herridge. (Off at the time of this writing.) Perhaps the focus now can shift back to her still-considerable songwriting talents, as displayed on How About I Be Me (And You Be You)? (MRI), an album of querulous ballads and sultry beats. “I had no plan about what sort of record to make,” says the 45-year-old Irishwoman. “I just made the songs that were in my head. If you know what I mean.” We do — we think.

How much should we read into your recent return to the shaved-head look?

You know, maybe things are more conscious than I might realize. I guess I take breaks away from being Sinéad O’Connor in my mind. And the Sinéad O’Connor character, I suppose, has a shaved head. Hair just doesn’t suit me. I wish I could have glorious long hair and look gorgeous and wear loads of makeup and high heels, but it just doesn’t fucking suit me. I try, but eventually everyone talks me out of it. Even my daughter gets on her knees and begs me: Will you shave it? 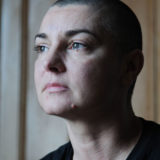 Does your daughter have a shaved head?

No, she has quite short hair, but not shaved. I wouldn’t be surprised if one day she has Muse shaved into the side of her head, because she’s convinced she’s marrying the singer from that band [Matt Bellamy]. Please apologize to Kate [Hudson] for me.

The new album closes with “V.I.P.,” which calls out Bono for getting his photo taken with the pope. Has he heard the song yet?

No. And the song’s not just about Bono. It was inspired by conversations that I’d had with Bono and [Bob] Geldof. But it’s not really all about them. It’s about artists, generally. It’s just asking a series of questions about, you know, where are we at? Shaking tits and ass is important. But it used to be that artists had other roles as well as entertainers — we stood for things and we expressed things on behalf of people who had a hard time expressing them. In the ’80s and the ’90s, we all gave a shit, and we put our careers on the line for shit. But it’s all about fame and fortune now.

So the song is a conversation piece?

I’m hoping that young rockers will listen to it and say, It’s okay, rap about bitches. Rap about how you just want to fuck girls. But at the same time, remember to stand for something spiritual also. I don’t want to come across like I think we should be serious the whole time, because I don’t. I really think the tits and ass is almost more important. We all need our minds taken off the bullshit. But I’m also saying that we are in crisis times.

You have been accused of being overly serious, but what did you mean when you blogged that you’d never date someone named Brian or Nigel?

It’s just that anyone I ever met called Brian or Nigel was the most boring people I ever met. And they wore really boring shoes. I mean, who would look at a little baby and call it Nigel, for fuck’s sake?

Have you ever been approached to do a reality show?

No. A couple people have suggested it, but, no, I wouldn’t dream of it. Unless they were going to clean my house and do my shopping every day.

You’re on Twitter, as @VampyahSlayah. Does that mean you’re a Buffy the Vampire Slayer fan?

No, it’s a nickname that some Rasta friends gave me. The Rastas called the pope and the cardinals old vampires because they’re blood-drinkers. So they all call me the vampire slayer. I spell it the way I spell it on Twitter because it’s in a Jamaican accent.

Would you do Saturday Night Live, in the unlikely event they’d ever ask you back?

Oh, yeah. I mean, I’m sure I’d be getting a bucket of water or some shit dumped over my head. But I’ll sing anywhere. If anyone asks me to sing, I’ll sing.

Could I hire you to be a singing coach for me?

Well, I’ve been giving singing lessons now and then to my daughter and some of her school friends. But I can’t routinely do it. I have lots of other stuff going on. But yeah, I would give anyone lessons. I don’t charge for them.

You perform “Lay Your Head Down,” the Golden Globe–nominated theme to [Glenn Close’s cross-dressing] film Albert Nobbs. Have you ever referred to the movie as Albert’s Knob?

Of course! And my other new joke is, What rhymes with Twitter?

You have a dirty mind.

That’s what my old man used to say. Yes, I have a dirty mind. I’m Irish.