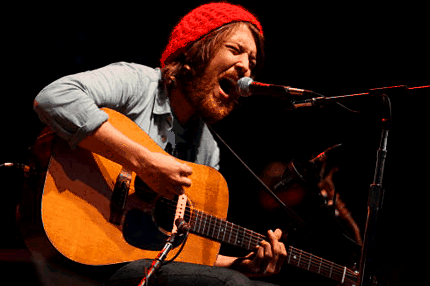 “Don’t start a band,” Robin Pecknold said in a tweet a few days ago. “Just find someone you love and show up for them.” He soon clarified he was talking about not musical duos, but “like, love love.” In a since-deleted tweet dated February 22, Pecknold said he was “legitimately single for the first time in like literally ten years.”

We mention this not because the gorgeous-voiced Fleet Foxes’ mastermind’s personal life is any of our business — we know, it’s not — but because it’s useful context for approaching his deeply melancholy new demo, “Olivia, in a Separate Bed,” posted on the Pacific Northwest folk-rockers’ Facebook page (via Seattle’s 107.7 The End). Just minor-key acoustic strums, Pecknold’s reverb-haunted vocal, and a whole lot of heartache, the song is not something to listen to while doing anything that requires your detailed attention: “Oh, Olivia, I still love you,” Pecknold sings at a particularly chilling moment. Though his melted-snow tenor and literary mien continue Helplessness Blues’ similarities to Paul Simon, this recording is much rawer than that comparison implies, just a really eloquent dude opening up his vein and letting a newly broken heart pump its miserable wisdom all over the track.

“Sadsack mode,” Pecknold types of the song. “Will probably change.” As one of those demos that captures a particular, hopefully passing mood, the song is hard to imagine being improved by a more professional-sounding production or a full band. Sure, it probably will be, but in the meantime, this one is for people who love sad, sad acoustic songs recorded in an intimate-sounding way.

It’s unclear how soon we might be able to hear finished versions of “Olivia” or other new Pecknold tunes. Fleet Foxes recently wrapped up their Helplessness Blues tour. Drummer J. Tillman has left the band, and two remaining members, Christian Wargo and Casey Wescott, are also in Seattle band Poor Moon, which will release its debut EP Illusion via Sub Pop on March 27. Let’s hope Pecknold keeps the demos coming, although let’s also hope for his sake some arise out of happier circumstances than the heartbreak expressed on this lovely new song.