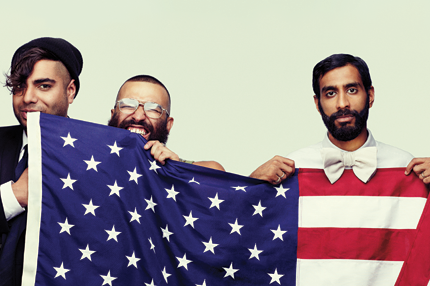 “Fuck gangsta rap,” a member of BBU declares at one point on the Chicago rap group’s new mixtape, ” ’cause black power is the hardest.” That’s the gist of bell hooks, released for free earlier this week by clothing company Mishka. This fully realized set attempts to outflank hip-hop’s swag contingent not by getting all preachy and boring, but by being even more inflammatory, provocative, and — for lack of a less contentious word — “real.” In this, it’s surprisingly successful.

That goes for the music, too. Rather than bite the hazy cloud-rap production or cinematic Lex Luger-style rattle that have been so de rigeur the past couple of years, this DJ Benzi-mixed collection confidently encompasses Gil Scott-Heron-style spoken word, bleakly smoldering ’70s-style soul, ’80s hip-hop, and ’90s techno breaks. There’s even a chopped-up Nirvana sample. And the skits are actually funny! The whole thing makes some of hip-hop’s other supposedly outrageous characters these days seem about as edgy as the private equity dudes who share their world views — black power, rapped well, really is harder.

A case in point is the mixtape’s last proper track, “Please, No Pictures,” which features Queens hip-hoppers Das Racist and mixtape maestros the Hood Internet, both of whom performed live with BBU last year. Over a minimalist electro-rap beat, the track takes on Arizona Gov. Jan Brewer in between references to Waka Flocka Flame, Lil Mama, Arrested Development (the group, not the show), Halo, Saved by the Bell, “young Richard Hell, old Jay-Z,” and the artists’ own previous records. With a goofy sing-song chorus involving a weed-puffing Miley Cyrus, it’s as party-friendly as BBU’s breakthrough “Chi Don’t Dance,” but with none of the regional-hit quality, and a new, razor-sharp focus.

Das Racist’s presence help puts BBU in a proper context: highly self-aware, occasionally hilarious rap by people who obviously love rap enough to keep up with it in all its forms, but who, in this instance, are betting that radical left-wing politics are liable to piss off more people anymore than the familiar gangsta tropes. Like Das Racist, BBU remember the most convincing reason to take on the powers-that-be: because it’s fun as shit.

Listen to and download “Please, No Pictures,” along with the entire bell hooks mixtape: