Good Sport: Madonna, M.I.A., and Minaj Play Ball in ‘Give Me All Your Luvin’ ‘ Video 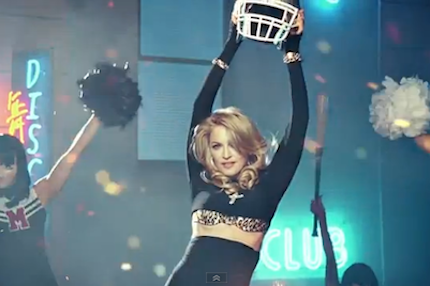 Madonna is not a woman who likes to share her spotlight, so the fact that she surrendered the aesthetic of her new video for “Give Me All Your Luvin’ ” to promoting her upcoming appearance at Sunday’s Super Bowl halftime show and asked M.I.A. and Nicki Minaj to appear on the track is no small feat.

The Madonna- and Martin Solveig-produced song — the first single from March 26’s M.D.N.A. — channels the retro vibe of her Austin Powers single “Beautiful Stranger” through the “Mickey” filter (Tony Basil is even rocking a similar cheerleader chic look in its single cover). But Madonna has a little additional firepower here: Minaj contributes a blitzkrieg 16 referencing “boy toy” and her own alter ego Roman, while M.I.A. joins in a few seconds later with a handful of slo-mo bars that ends with a gun blast censoring her parting shot, “I don’t give a shit.” In short: Everyone plays themselves perfectly.

The video, directed by Megaforce, is regrettably light on Madonna’s dancing, especially considering her videos for 2008’s Hard Candy were elaborately choreographed. Her attempt to find a bridge between sports, love, and fame falls a bit flat — “Fans can make you famous, a contract can make you rich, the press can make you a superstar, but only luv can make you a player” is scrawled in cursive at the top of the clip — but in the end, the football players and cheerleaders in the video are all literally faceless passersby. They, like the two high-profile MCs, are all here in service of the Queen of Pop — they are shouting “L,U, V, Madonna” and taking bullets for her, after all.

But are those Smirnoff bottles we spy on the bar while Madonna strikes familiar poses and Nicki and Maya are decked out like virgins? Everyone’s gotta play the stupid game these days, even if she is not only a different kind of girl, but a different kind of queen.

Madonna Will Direct Her Upcoming Biopic