wo dubstep kingpins meet on a blissed-out track from Rusko's 'Songs,' due March 27 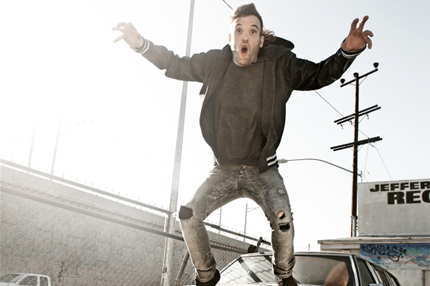 London producer Skream is one of dubstep’s O.G.s, a fact electronic dance music’s current crossover wunderkind Skrillex recognized during his Grammy pre-ceremony shout-outs. Leeds-born, L.A.-based Rusko is another of the scene’s kingpins, providing more of an evolutionary "missing link" between the genre’s shadowy South London origins and its current high-adrenaline "brostep" incarnation.

As Rusko gets set to drop new album Songs on March 27 via Mad Decent and Downtown Recordings, Skream has thrown his weight into a blissed-out remix of latest Rusko banger "Somebody to Love." The revamp adds a touch of kuduro’s spicy shuffle — and, of course, plenty of chest-rattling low-end — to the original’s breakbeats and house-diva vocals. When the drum track cuts out it’s like that moment on a roller coaster when your stomach gets caught in your throat. People with back problems, motion sickness, or a history of heart problems should not ride.

Grab our exclusive premiere (at a DJ-friendly 320 kbps!):