'In the Belly of the Brazen Bull' due May 8 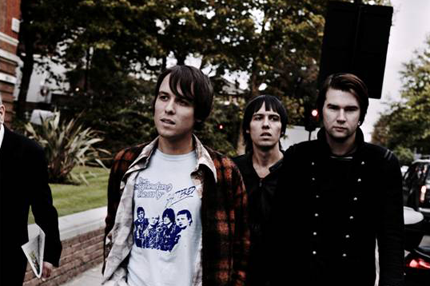 Fans of Brit Rock rejoice! We’re psyched to announce that English trio the Cribs have a new album on the way. The upcoming In the Belly of the Brazen Bull, the band’s fifth long-player, was largely recorded with superstar producer David Fridmann (Flaming Lips, MGMT) at his studio in upstate New York. Brothers Gary (bass, vocals), Ryan (guitar, vocals), and Ross Jarman (drums) also recorded at a self-produced session in London and spent a few days in Chicago laying down tracks with noted indie-rock sound man Steve Albini. Unlike the most recent Cribs effort, 2009’s Ignore the Ignorant, In the Belly of the Brazen Bull, finds the Wakefield, England, outfit down to a lean-three piece — ex-Smiths guitarist Johnny Marr was on-hand for the previous album. For a taste of the band’s re-furbished sound, we’ve got the new album’s hard-charging, bittersweet “Chi-Town” as a free download.

Want more? Bull is out May 8 on Wichita Recordings. Before then, the band will undertake on eight-date North America tour that begins on April 3 in Portland, Oregon. A short European stint starts on May 7 in Nottingham, England. Full tour dates are below. Bring your Union Jacks.
DOWNLOAD