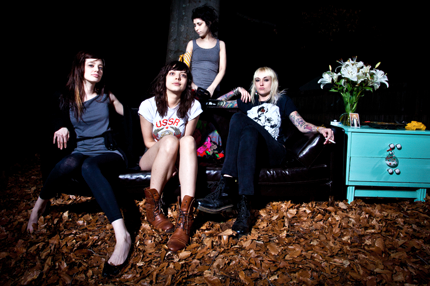 The Coathangers are building momentum. The Georgia punks’ third LP Larceny & Old Lace got a healthy dose of notice thanks to badass tracks like “Jaybird,” their homage to the late Jay Reatard, and now they’re already dropping some new music on us — today SPIN brings you “Smother,” the A-side of a split 7″ with VICE’s demonic San Juan kids Davila 666. The release is part of Suicide Squeeze’s singles series, and it arrives April 17 in a very limited edition, with just 750 copies pressed (250 gold, 500 black) The cover was designed by Westin Glass of the Thermals, with whom the Coathangers toured Europe last year. Davila’s B-side is “No Crees Que Ya Cansa,” which translates to “Don’t You Think It’s Tiring” — based on these shots of the Puerto Rican rockers on the road, we can understand where they’re coming from.