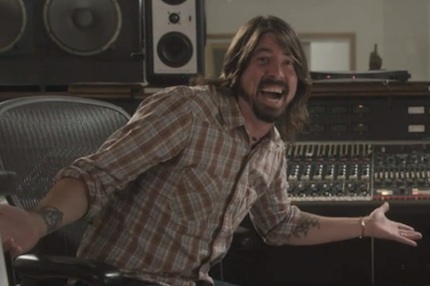 Dave Grohl and the Foo Fighters took home a whopping five Grammys at last night’s award show, so do him a solid and watch the 25-second trailer for his new documentary, Sound City. Warning: It’s loud.

The documentary, which comes after the recent (and now Grammy-winning) doc on the Foos themselves, Back and Forth, captures the history of Sound City Studios, situated in a magical place called the valley (Van Nuys, California), that has hosted countless rock greats, from Trent Reznor to Tom Petty, and has taken part in the production of seminal albums from Fleetwood Mac’s Rumors and Neil Young’s After the Gold Rush to Nirvana’s Nevermind and Rage Against the Machine’s self-titled album.

And for those of you who can’t get enough of the Grohl-meets-Beatle shred contents from last night’s epic finale, we wanted to let you know that the Foo Fighters also paid tribute to Macca over the weekend at his MusiCares Person of the Year charity show. The video over at Consequence of Sound has since been removed (via the Telegraph), but check out the Foos’ interview about the legendary Beatle — after, of course, you watch the Sound City trailer.

The Foo Fighters on the Influence of Paul McCartney: