A chilled-out, nostalgia-ambivalent example of 'Mixed Emotions,' out on March 20 via True Panther Sounds 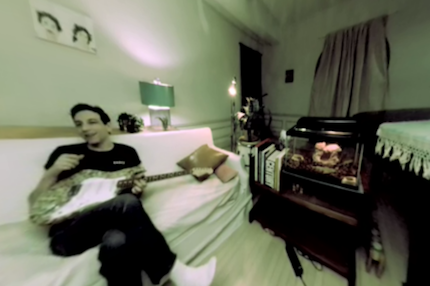 “You really love your chillwave.” That’s what a friend said over whiskey-and-cokes last Friday night while songs from the new Tanlines record played on an iPhone hooked up to the stereo. Classic week-late comeback: “No, I just really love good music.” Or something like that. Tanline’s forthcoming debut album, Mixed Emotions (due March 20 on True Panther Sounds), is full of vaguely tropical electronic pop about feelings, the type of heart-tugging synth constructions that can appear as if they’re washing over you from all angles when you listen in headphones. In the new video (directed by Das Racist/Real Estate vets Weird Days; via Pitchfork) for nostalgia-ambivalent Mixed Emotions advance mp3 “Brothers,” that’s almost literally true; click and drag with your mouse and you can watch singer/guitarist Eric Emm and percussionist/keyboardist Jesse Cohen — plus a TV stand-up comic who happens also to be Cohen — in glorious 360 degrees. “You’re just the same as you ever were,” Emm observes in a full-throated cry that’s closer to the Tough Alliance than, say, Neon Indian. Feel it all around? Call it what you want: